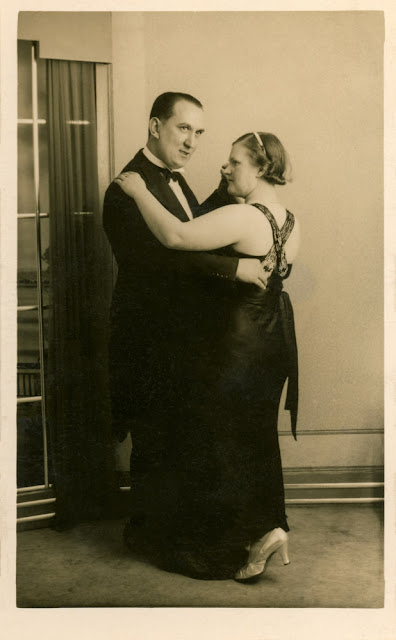 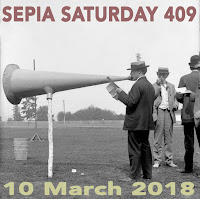 This week, I did have a perfect match for the Sepia Saturday theme image which shows an oversized loud speaker at some kind of sports event. There was a photograph from one of the albums of Frank Fieldhouse which had been taken at some kind of sporting event in the 1930s or 1940s, and which had a large public address speaker mounted on an old van. Sadly, however, the photograph has fallen through one of the many holes in my family archives, and - for the time being at least - must remain a kind of sepia memory of what was. I mentally reviewed the other suggested themes - oversized objects and strange objects - but nothing seemed to come to mind.

Motivated by my search for the lost loudspeaker, I decided to press ahead with my digital aspiration to scan, copiously file and selflessly preserve all my family photographs and chose, at random, the next print from the "to do" pile. And who should appear than the very same Frank Fieldhouse along with his then fiancé and later wife, Miriam Burnett. The studio photograph, which is dated 1939, shows the couple all dressed up and ready for the ballroom.  It may be that they were seasoned performers on the dance floors of West Yorkshire, if that is the case no record has been handed down (and the one thing you can say about Uncle Frank is that if there was a record to be handed down, handed down it would be).

Therefore my contribution to Sepia Saturday this week may not be strange or oversized, but it is sure to be memorable. Ladies and gentlemen, put your hands together for Frank Fieldhouse and Miriam Burnett dancing the foxtrot.

For more strange and oversized objects go to the Sepia Saturday Blog and follow the links.