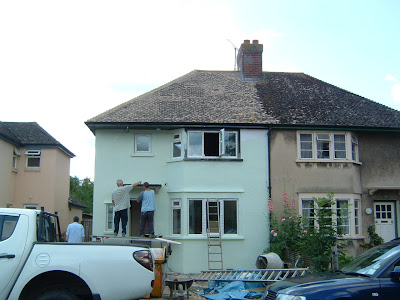 So here it is - our development house all-but completely painted, now, outside. Light green, as you can see - mind you, this photo seems to have a green "cast" as well - (builder) Alan's truck in the foreground is actually pure white!! ... Two neighbours have said they don't like the colour (which is just too bad!) - but we really can't see why, it looks lovely (and much prettier than in this photo!)

Perhaps it's because it's the only green house in the cul-de-sac - there are several variations of creams (e.g., as just visible on the house to the left), (light) blues, a (light) pink, whites (dirty, as white always goes, why we didn't choose it!) and some un-painted (very dirty - as for the house to the right.) We decided any cream would clash with others around, wondered about blue but then thought equivalent green would be different and nice. It is - (and shucks to the complaining neighbours. Mind you, the one may have been teasing. Anyway, I let him use our skip....)

Alan's (it's him and son Alan taking a meat hook - (well, it looked like it) - off under the porch in this photo) nearly finished his jobs now, Dave (he's upstairs with his son Dave in this photo, but neither visible) has only half a flat left to skim-plaster, Mick has some more (internal) doors to fit and wainscotes to do, and the rest is up to us-two apart from some carpet laying and gas-man Martin to commission the boilers. Quite a lot for us to do but shouldn't really take very long - famous last words and all that! - few weeks rather than days, but that's all.

Official electrician Graham passed my (electrical) wiring for the upstairs flat yesterday - so only a final electrical test required now... which doesn't really worry me because I can do the same tests before he comes and so know they'll be OK - what was more worrying was the wiring approval - people have such different opinions about earthing (I just did what Graham told me!) and exactly how many clips to use per metre of a wire (as it were) - although the safest method is to use none - that way the wires are loose in the walls and ceilings so if you put a nail or screw in and it hits a wire, chances are the wire will be pushed out the way rather than spiked. (Bet you lot never realised that! Or even thought about it, of course - why should you?)

Paid £500-plus for a compulsory acoustic test next Monday - sound insulation between the flat's bedrooms and rooms above (or below.) Really annoying, give me two decibel meters and Jane and I could do it in ten minutes. It's like our approval certificate for thermal insulation - an automated computer print-out of assumed values - not even measured - given our specifications. Another £500 or so, that was, for a print-out of assumptions. It sure is a crazy world of regulations that are so often so questionable.

Ah, well, should all be done quite soon, now...