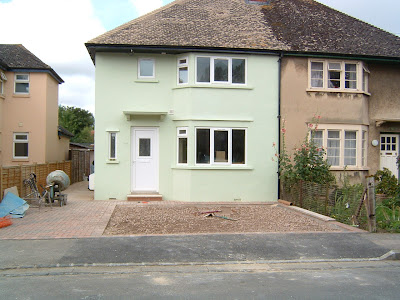 As light relief from Ali's fabulous but (I find) still emotionally intense account of regaining his hearing....

(Which still thrills me as much as when I first heard it - hearing me for the first time he, of course, claimed he hadn't known Jane had married a Russian.... it was truly stunning following his implant to be able to simply sit and chat with him rather than have to grab pen and paper to thereby rather clumsily try to discuss anything remotely complex!)

MP (our development house) now - as in the photo - has a front "drive". Well, gravel parking for two cars, where the brick paving is on the left will soon (tomorrow) have a little front wall and a pedestrians' gate. And that's the front "garden" done. At the back, flowers are blooming and the lawns growing all-too fast. When we go along to paint and wire and build bathrooms and kitchens, we now park in style on "the gravel drive." It's seriously useful because the house is in a cul-de-sac and previously, parking in the road, we always had to go to the end to turn around - as Jane said "Now we'll never see the end of the road ever again."

Inside, downstairs, the mains sockets are now connected - as is the cooker supply (but the cooker itself - it's separate hob and oven, as are splashback and hood, sitting in boxes awaiting attention and constantly getting in the way - need built units to be fitted in.) The boiler awaits the gas man to commision it - water, radiators, bathroom, gas and electricity are ready and waiting but the kitchen sink needs... units to support it. If you foolishly wonder if the waiting pipes for the kitchen are OK and fiddle with the little valve, you get very wet. Just as if you wobble the valves waiting for the washing machine in the utility room trying to clean spilt the plaster off, it becomes a wet room without the tiles or drain. But it does settle the inevitable building dust a bit. Yes, I did that, of course.... I mean, knocked the valve merely intending to clean off plaster, forgetting the result would be a jet of high pressure water... - I've left the water pressure connected just in case time revealed any leaking joins. Actually modern push-fit plastic piping is rather like Ali's implant... very simply, it works. But I'm still constantly told cautionary tales it "won't really".

So, our development is all good stuff and at a guess we'll be ready for final inspections and setting up sale arrangements within about four weeks. This has been a long haul so it's a huge relief to see the end of the project in sight. Sadly, the fact is that we won't really be happy until we see money ching into our account to repay all the loans we had to arrange to cause all the good works.

Whether we end up with a profit is almost neither here nor there - that's all about the state of the housing market. It does seem likely that in fact we'll come out about even and there's even glimmerings we may do better. If it is evens, that's OK, that means an awful lot of money (after loans repaid) available for a next project. But definitely simpler. Or not. We have learnt so much from this project to do the SAME would not be anything like the same problem or cost.

I've debated my tail end comment forever. Ali's true story about his hearing is SO fabulous.. but I have my own story of debilitating illness where in 1979 something so fabulous happened I often want to tell the tale. Would anybody like to know?