POSTCARDS FROM HOME : A Mystery Wrapped Up In An Enigmatic PC 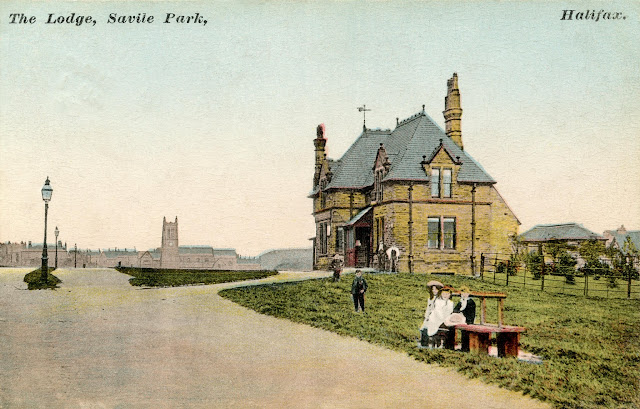 Another of those lovely old postcards that seem to inhabit a hinterland somewhere between a photograph and a pen and ink drawing. Despite the rather crude hand colouring, the scene is instantly recognisable to anyone who is familiar with Halifax 110 years later. The Lodge is now a popular fish and chip restaurant and the wide sweep of Savile Park still provides a welcome break from the closely packed houses around its fringes.

The card was sent to Master Joe Turner by his mother in August 1905 and the message is as follows:-

Dear Joe, Thank you for the post card. I went up to school to tell Mr Haigh and he said you would break up on Friday for a month. We all send our love to you and hope you are a good boy. From Mother. 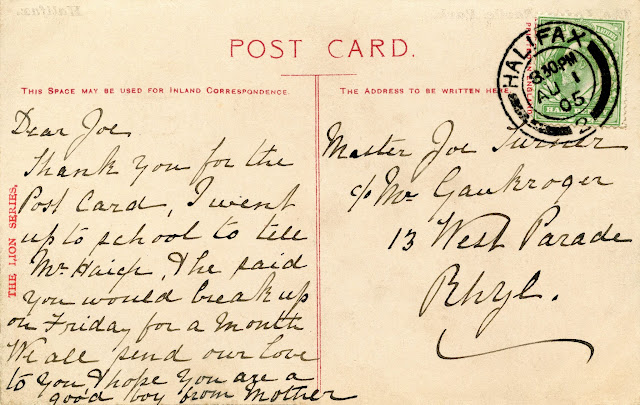 As usual, the message is an mystery wrapped up in an enigmatic picture postcard. What was Master Joe doing in the seaside resort of Rhyl rather than at school where plainly he should have been until Friday. I strongly suspect that the Mr Gaukroger he was with will have been a friend or relative from the Halifax area - Gaukroger is such a common name in this part of the Calder Valley and comparatively rare elsewhere. At best, the situation is about as unclear as the three children sitting on the bench in front of the Lodge. Whatever the story might have been, let us hope that Joe had been a good boy.
at April 19, 2016