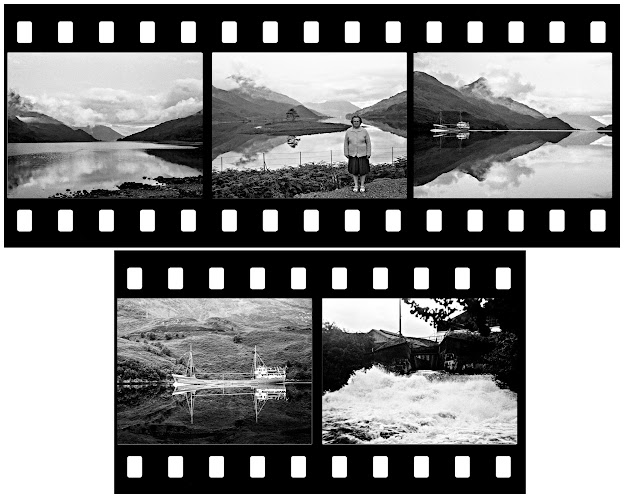 One of the great delights of old negatives is that they come in strips of five or six and thereby provide immediate contextualisation. You may not immediately remember where a particular photograph was taken half a century ago, but once you see it next to another picture on a negative strip, memories come flooding back: it was the time you took Aunt Ethel to Hastings (look, there she is), you remember, the time the dog was sick in the cathedral (there’s a picture of it).

The strip of five negatives dating back over fifty years which I scanned this morning had no sickly dogs nor any cathedrals, but it did include a series of images of Loch Leven in Scotland. The village of Kinlochleven at the head of the lock was famous for being the first village where ever house was powered by electricity - an achievement that was a by-product of the hydroelectric power station that was built to power the aluminium plant (the last of my five photographs shows the water cascading down from the hydro plant). That is not Aunt Ethel, but my mother - with the calm waters of the loch and the majestic Grampian Mountains in the background.

The aluminium plant has long gone, but this strip of negatives remains, fixing the memories of all those years ago.
at April 01, 2016