An Evening Out At Hammersmith Town Hall 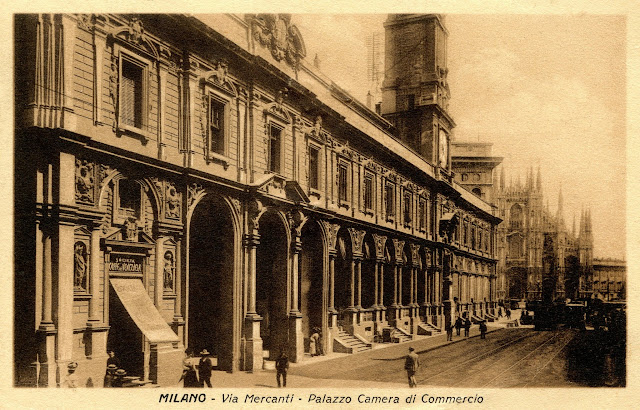 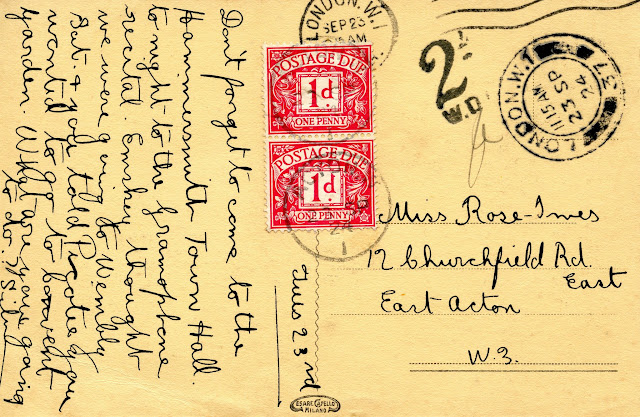 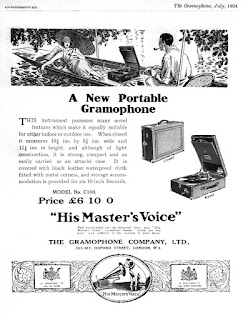 Old picture postcards can take you to the strangest places. This card, which features the Via Mercanti in Milan, was sent back in September 1924 to Miss Rose Innes of Churchfield Road, East Acton, London. But the card didn't take me to Milan's Palazzo Camera di Commercio, it took me to Hammersmith Town Hall on a Tuesday night. Rose was being invited to a Gramophone recital, which, from our modern perspective, sounds like a strange event for what was an important local hall, but back in the 1920s, such recitals were a popular crowd-puller.

I wasn't able to discover the Hammersmith Town Hall programme but I wouldn't be surprised to discover that it was just the same as the recital held in Dundee a couple of months later. A little bit of old pasteboard, some ink and a postage stamp has the ability to transport me back in time so I can join in with Rose and Ernest Hemmings in a chorus of "My Word You Do Look Queer"!


GRAMOPHONE RECITAL DUNDEE.
The popularity of the gramophone, and "His Master's Voice” records in particular, was illustrated yesterday, when two gramophone recitals were given in the Foresters' Hall, Dundee. At the evening performance the size of the audience taxed to the utmost the capacity of the hall. The programme was delightfully varied, and gave a fine illustration of the large musical field covered by H.M.V. records. On the latest type of gramophone, where the horn, tone-arm, and sound-box are dispensed with, was played the difficult violin solo, Ronde des Lutins." The artist was Jascha Heifetz. The tones of the violin were clearly brought out, and it could quite easily have been supposed that the musician was playing in the hall itself. In the Caird Hall on Monday night Madame Galli-Curci sang Dell 'Acqua's "La Villanelle." She was heard last night in this same song with excellent effect. As an encore Mr H. L. Rink, who was in charge of the demonstration, put on another record of " Una voce poco fa," which Madame Galli-Curci also sang on Monday. The 'cello record, "Le Cynge," in which the wonderful whistling of nightingales forms a most effective background, preceded that well-known tenor, John M'Cormack, in "Down in the Forest." This was a very beautiful item. Edward German's familiar Nell Gwynn Dances, played by the Band of the Coldstream Guards, was followed by a dainty melody with a delightful lilt, Russell's " Just Because the Violets." Every word of the song (sung by Walter Glynne) was distinctly heard. Excitement rang in every note of that spirited song of the barber in Rossini's opera, " The Barber of Seville," " Largo Factotum," and in the impassioned Spanish love-song, "Ay, Ay, Ay." a comparatively new tenor, Michele Fleta, was heard to much advantage. A pianoforte accompaniment to the gramophone adds much to the beauty of whatever theme is being played, which was illustrated when Mr Rink accompanied different classes of music. To the continued applause Mr Rink replied with two Australian Bush songs. " Comrades of Mine" and " Rider," given in characteristic style by Peter Dawson. One of the original solos sung by Caruso for " His Master's Voice," " Ombra Mai Fu," better known as Handel's Largo was reproduced, and that well-known contralto. Miss Edna Thornton, gave a rendering of "Softly Awakes My Heart" the recording of which is well-nigh perfect. The programme finished with the amusing record, "My Word, You Do Look Queer," by Ernest Hastings.
at March 29, 2016