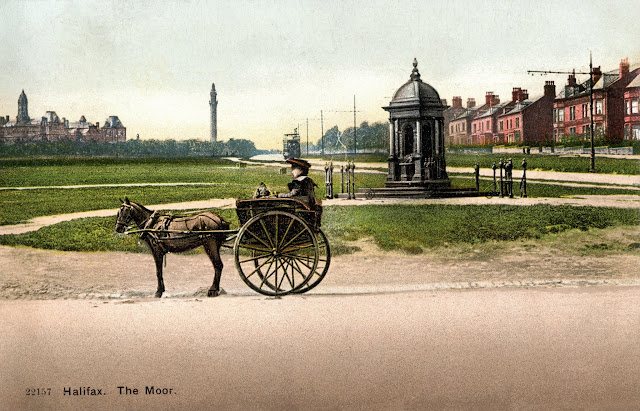 An early twentieth century picture postcard of The Moor in Halifax. It is a view I became very familiar with half a century after this postcard was first published. The fine looking building on the left of the view is my old school - the old Crossley and Porter Orphanage School (it had dropped the orphanage part by the time I attended) whilst the imposing looking tower is Wainhouse Tower - an old dye workers chimney which was converted into a Victorian folly by an eccentric owner. The ornate stone drinking fountain was still there in the late 1950s - I recall chalking up my initials intertwined with a long forgotten girl friends upon it - and indeed it is still there today (the initials will have been long washed away by the Yorkshire rain. 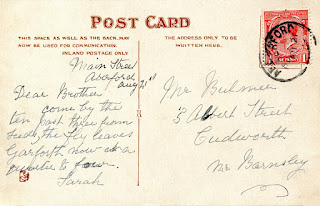 The splendid dogcart will have long trotted away - down the road into Halifax or maybe over the hill to Sowerby Bridge. And the trams are also long-gone - rattled away to the breakers yard.

As usual, the reverse of an old postcard contains as much social history as the obverse. Here we have instructions from Sarah to her brother about a visit to Aberford, a village on the old Great North Road a few miles north east of Garforth. At first I assumed that "the fly" was a coach service that somehow limped into the twentieth century. But a little more research revealed that "the fly" was the name given to the private rail line that extended from Garforth to Aberford which was originally built to transport coal from the local pits to Garforth, through which the main line of the Leeds and Selby railway passed. The line closed in 1924 and we can pin down the date of the card a little further still by the use of a 1p stamp which meant that it must have been posted between 1918 and 1921.
at March 01, 2016