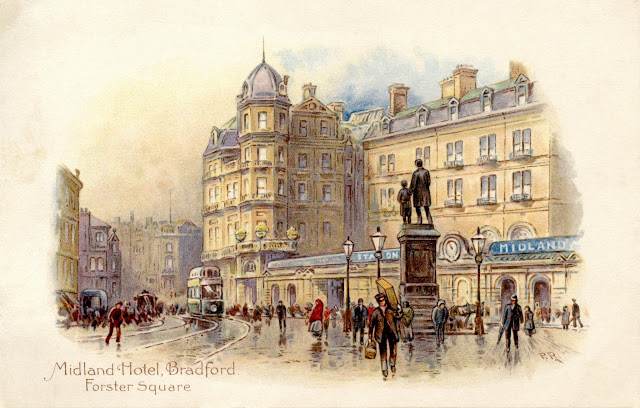 The other day I managed to acquire an old picture postcard featuring the Midland Hotel and Station in Bradford. I am still quite fond of what remains of the Midland : although the station has been replaced by a small glass and plastic concoction, most of the imposing hotel remains and now snuggles up to the new Broadway Shopping Centre. For the moment Bradford is blessed with two old Victorian hotels - the Midland and the Great Victoria - whose ceilings are as high as the aspirations of the wool merchants who stayed there 100 years or more ago. Their panelled bars seem to have soaked up a century of pipe smoke, lanolin oil, greasepaint and Blue Crest Snuff. Long dead voices echo down corridors and the plaster covings that line the ceilings resonate raw history.

In this modern age we are blessed or cursed with a surfeit of information. I am of the "blessed" school of thought and enjoy nothing more than buzzing around from subject to subject collecting useless information like some ageing pollen-starved bumble bee. The postcard of the hotel sent me straight off the the newspaper archives (I have now told the GLW that if ever money gets tight we must abandon all household heating before I give up my subscription to the British Newspaper Archives), where I discovered this tragic tale that should act as a warning to us all of the dangers of "larking". 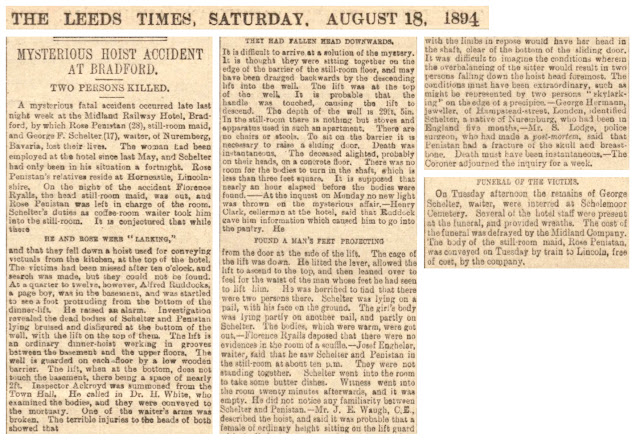 In 1894 the bodies of two young employees of the Midland Hotel, Bradford were discovered at the bottom of a twenty-nine foot lift shaft. Rose Penistan was 28 years old and was employed as a still-room maid (the still room was the room where tea and coffee making paraphernalia and other bits of domestic equipment were kept) and George Scheller, who was only 17, was a waiter. Precisely how they met their deaths was never ascertained and at the inquest the jury returned an open verdict.

In the case of the Midland Hotel, it is not just the ceilings that resonate with raw history, the hoists and lift shafts drip with bloody mystery.

The subject of my particular postcard was somewhat more prosaic: 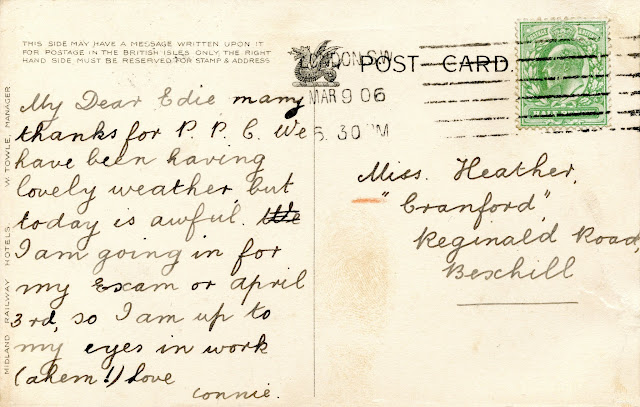 To: Miss Heather. Cranford, Reginald Road, Bexhill.
My dear Edie, Many thanks for PPC. We have been having lovely weather but today is awful. I am going in for my exam on April 3rd, so I am up to my eyes in work (ahem!). Love, Connie

Let us hope that Connie continued to work for her exams rather than fall prey to the dangers of "larking about".