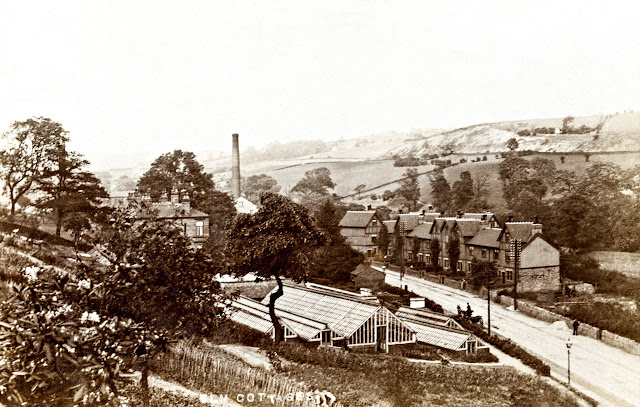 I bought this old picture postcard of Elm Cottages which still stand on Bradford Road between Brighouse and Bailiff Bridge because of the subject matter. The photograph captures landscape I am very familiar with, but captures it 100 years in the past. For those who live in these parts it is full of fascinating detail - the tramlines on the road, the greenhouses which were part of Kershaw's market gardening business - the street lights, the mill chimney, the past. 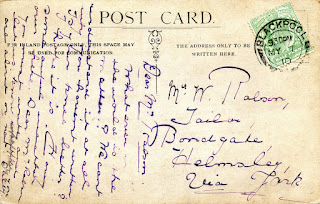 But there are two sides to every postcard, and the message on the reverse tells a fascinating story in its own right. It is addressed to Mr and Mrs Ralson, a "tailor" of Bondgate in the North Yorkshire market town of Helmsley and was sent by someone called "Daley" who looks as though they might have been on holiday in Blackpool. The message reads as follows:

Dear Mrs Ralson,
Whatever in the world is the matter? We can't understand it at all why you haven't written. Is your knee better? I hope it is. Having some awful weather over here. Dear Mrs Ralson you must write and let us know whether you are alive or not. Love Daley.

Christopher and Mary Ralson are easily traceable via the 1901 census - although it appears that Mr Ralson was a milk seller rather than a tailor - when they were living on Bondgate with their two daughters Mary and Ada. But by the time of the 1911 census (a few months after this card was sent), Mr Ralson is listed as a widower, and Mary is gone. So, a little late in the day, we can now write back to Daley with the simple message: "not". 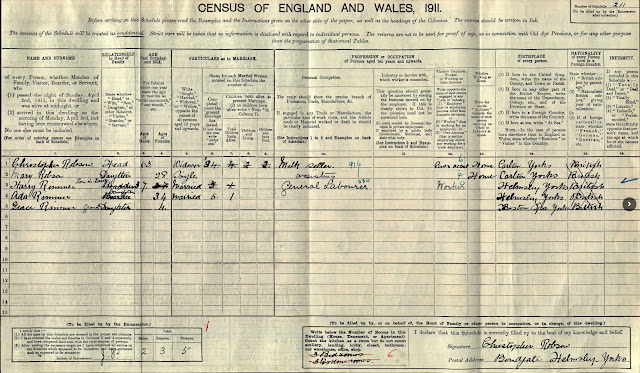