The Deep Sea Fishermen Of Shipley 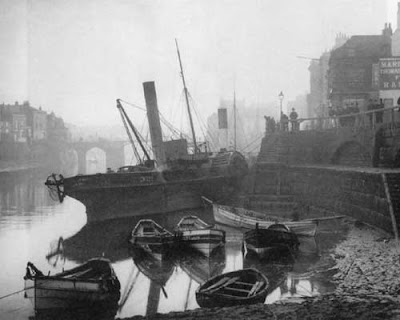 Many, many years ago I found myself working for the then Department Of Employment and Productivity in Bradford, Yorkshire. I was a humble clerk in the Labour Exchange and my main tasks revolved around the "signing-on" of unemployed people and the payment of their weekly benefits. Occasionally we were given other tasks to complete and sometimes these involved the collection and collation of statistical returns for the Department of Employment nationally. Back then - in the 1960s - the Department published an Annual Census of Employment which showed how many people were engaged in each area of employment in each area of the country. One year I was given the task of transferring the totals from the local office records to the official return which had to be sent to the Department in London. It was a complicated document with subdivisions of both the occupational categories and the local areas. I was young and bored and no doubt my mind was elsewhere. This is not meant as an excuse, but as an explanation. An explanation of why according to the official British records there was a sudden emergence of the deep sea fishing industry in the small town of Shipley which, unfortunately, was a good 50 miles away from any kind of sea - deep or shallow. In 1967 there were some 135 deep sea fishermen employed in Shipley according to the Census. One can only assume that they were split between the Leeds Liverpool Canal and the Shipley Glen boating lake. Or perhaps, just perhaps, some hapless junior clerk copied out a total into the wrong column.
I am reminded of this somewhat embarrassing episode by a report in the paper today that a BBC investigation has discovered that a recent major government report which claimed that the cost of obesity to the UK would amount to half of the NHS budget by 2050, somehow got the figures slightly wrong. Wrong by £23 billion in fact! It seems that in a critical calculation the predicted costs were multiplied by 7 in stead of 3.5. A simple enough error. I have every sympathy for the poor clerk involved. I remember when my mistake was eventually discovered - far too late to stop the publication of the figures - I asked whether it would help if I put on a sou'wester and moved to Shipley. Perhaps the current culprit could volunteer to scoff a cream-cake or two.
at November 22, 2007