Problems Of A Somewhat Personal Nature

I know I have not posted to the blog for days and days. I've had a lot on my mind. Sometimes you have to get things in proportion. After all, it's only a silly blog. Nobody reads it. At best its nothing more than a kind of sudoku for the innumerate : at worst an exercise in self-aggrandisement. It's a bit pathetic actually. Anyway, I've been having problems. It's the kind of thing that happens to everyone at some time or another. It's nothing unusual. Nothing to snigger about. It's personal. Not the kind of thing you want to discuss in public. A little embarrassing really. Oh, alright then, I'll tell you, but you must promise not to laugh.
Last weekend my dear wife reminded me that we had people coming to dinner on Saturday. She also reminded me - as oft is her want - that I am the only husband in our immediate circle of friends who does not cook. This is a kind of twenty first century equivalent of a husband who didn't erect shelving or fashion mortise and tenon joints fifty years ago (mind you, I didn't do that either). When the discussion turned to what we would have for starters I declared "I will do Yorkshire Pudding" (I must explain to any foreigners reading this that, here in Yorkshire, Yorkshire Pudding is traditionally served as a starter).
I might not be much of a cook, but I can conjure up a prize Yorkshire Pudding (it always has capital letters, a bit like God). But seeing as I hadn't prepared any for some time I decided to have a dry run, so to speak. So on the Sunday night, the eggs, milk, flour and salt went into the blender and the fat went in the trays and thirty minutes later out of the piping hot oven came ..... the most miserable shrunken concoctions you have ever seen in your life. They looked like, and had the consistency of, an open flesh wound. They tasted worse. 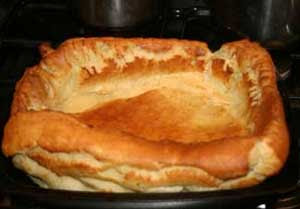 My family were quick to comfort me. "It must happen to everyone at some time". "It doesn't mean you're less of a man". All the usual stuff. I couldn't sleep at night. I had to track down where I had gone wrong. By morning I had decided it was the oven temperature. Not hot enough. Try again. Monday night saw another dry run. This time the oven was hot enough to fire porcelain. Eggs, milk, flour etc etc. And out of the oven came what can only be described as pancakes (as in "as flat as a pancake"). By now I was nearly in tears. My family tried to remain loyal but I caught my wife on the phone to her cousin Carrie whispering "something terrible has happened).
By Wednesday I had thrown out all the flour, milk, eggs, and fat and bought new. Just in case. Wednesday night they were as flat as Holland. On Thursday I binned the blender and bought a new one. Thursday night as flat as Twiggy. I have only one day to go before the guests arrive. My life is in total upheaval. I don't know where to turn. My family say they still love me but I found my wife looking out a recipe for Tomato Soup. In and amongst all this I just haven't had time to write silly blogs.
Tomorrow night will tell. Can I overcome this problem and once again find the prize of my manhood - my Yorkshire Puddings.
at November 30, 2007