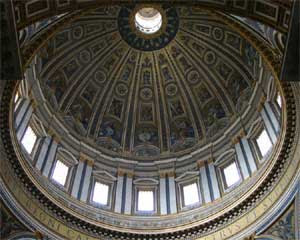 I would need to find my well-thumbed copy of Bronowski's Accent Of Man to be sure, but I think the argument goes something like this. Any idiot can build a tower. People had been building towers for centuries. Give a child a set of Lego bricks and they will build a tower. But a dome, that is a different proposition. It takes a developed, thinking, analytical mind to build a dome. Domes require planning, they require a thorough understanding of the principle of mechanics, they require fine measurement, they require precision and they require more than a dash of genius. This helps to explain why domes didn't come along until the Renaissance. Why they are almost a symbol of that great intellectual leap forward. If the seven ages of mankind were engaged in a galactic game of Monopoly and each age had its own little metal symbol to push around the board, Renaissance Man would have a dome. And this brings me to my Yorkshire Puddings. If you recall - admit it, you have been thinking of little else since my last post - I had been having problems getting my Yorkshire Puddings to rise. The dinner party was on Saturday and I had promised the kind of Yorkshire Puddings any red-blooded man would be proud of. But time after time they had failed me. So what happened?

What happened, was that I cheated. My normal Yorkshire Pudding trays are a good five inches in diameter. I won't get into the fluid mechanics of it in too great a detail, but - believe me - to get something with such a large surface area to rise satisfactorily requires a powerful (and well-blended) mixture. Only the very best Yorkshire Pudding mixture can do it. That kind of surface area really does separate the men from the Walter Softies. As Saturday evening drew nearer I got more and more nervous - and we all know what effect that has. Would the first course be stunning Yorkshire Puddings or public humiliation?

I bottled it. I nipped down to Asda and bought a couple of new Yorkshire Pudding trays. Two inch diameter. The Nursery Slopes of Yorkshire Pudding making. So, the guests were served on Saturday night, not a magnificent St Peters' or St Pauls'. They got a Leaning Tower of Pisa. I avoided humiliation. Everyone went "wow", and "how magnificent". But I knew. I knew I had run away. Those large Yorkshire Pudding trays sit in the kitchen cupboard, always ready to remind me of my failing. I am less of a man now than I was before. Sad, isn't it.
at December 03, 2007