Mine Is Bigger Than Yours

Having booked our 2008 holiday aboard the yet-to-be-launched P&O super-liner, Ventura, we turn to the Virtual Ventura website to read about the ship we will call home for two weeks during the coming summer. The ship is still undergoing sea trials, but the site can provide you with a computer-generated virtual tour of all the attractions available on the 19 decks. The descriptions are, of course, full of superlatives. And so they should be - it is a truly stunning ship. But as you read about the designer restaurants, the marble fittings and the sweeping staircases, you cannot help but think back to that other super-liner which was launched 97 years before the Ventura. There are no comparisons between the Ventura and the Titanic provided on the P&O website : understandable, I suppose. It would be bad form. So I have had to compile my own list, which is as follows:

The dry statistics tell only half the tale so here, on the News From Nowhere Blog, I can present, exclusively, for the first time ever, the only picture of the two ships, side by side, in true scale. 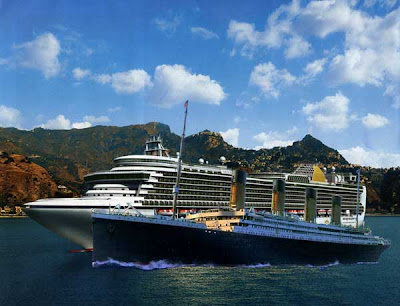 As you can clearly see, the great Titanic looks like a stick-insect compared to the Ventura's mighty elephant. Whilst much of the Titanic's height is taken up with those four great funnels, on the Ventura that space is given over to jazz bars, swimming pools and cigar lounges. Keen followers of the Blog will be glad to know that we are not booked on the maiden voyage and the cruise we are going on shouldn't take us anywhere near icebergs. But with climate change the way it is, who knows.
at December 18, 2007