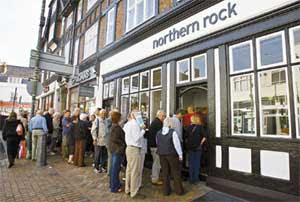 The financial crisis that has swept in following the collapse of the US sub-prime mortgage market is no great surprise. For some time it has been as inevitable as the 1929 stock market crash. The same unrealistic belief that speculative prices travel in only one direction must have existed in the months leading up to the Wall Street Crash, the same wide-eyed surprise when fortunes built on borrowed promises began to unravel was surely just as much a part of the world after Black Tuesday. The crises are not identical - at least, let us hope they are not identical - the downturn is not as sharp and, hopefully, we have learnt something about economic management over the last seventy-five years. 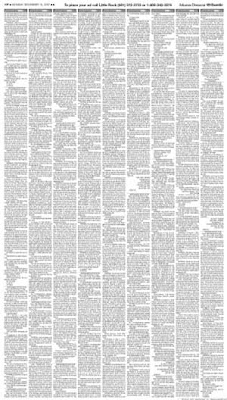 However, this is not a posting about economic theory : rather one about images. I often think that you could put together a decent history of the last fifty years based on nothing but images. Part of the story of 2007 will inevitably be the financial crisis resulting from unrealistic mortgage sales. Until yesterday the image I would have selected to illustrate this little bit of UK economic history would have been the well-known one of queues outside the beleaguered Northern Rock Building Society. However, yesterday I was reading a copy of Arkansas Democrat and Gazette (PressDisplay is a wonderful service) and was intrigued to see several pages at the back of the newspaper filled with columns of tightly packed legal notices. On investigation these turn out to be official foreclosure notices, announcing that poor devil after poor devil has defaulted on their mortgage agreement and the property will now be auctioned.

The legal wording could almost be a poem.Take for example just one example, an extract from the foreclosure notice of Tabitha and John Richards.
"Now notice is hereby given,
That at the front door of Sevier County Courthouse,
On the 11th January 2008 at 1.15pm,
The following property will be auctioned.