I Love To Go A-Wandering

When I was at University and should have been studying something grown-up and important, I would enjoy nothing better than to go to the University Library and browse. It didn't matter what I was browsing : the more esoteric or even pointless the book or the journal, the better. Some days I would investigate sheet metal trade boards in 19th century commerce, other days it would be microscope design in 18th century France. Rarely would it be the interpretation of the production possibility curve (which is what I should have been reading).
Equally, when I was lecturing or working on EU information I would occasionally escape the targeted subject area and wander around : reading novels instead of text books, writing daft stories instead of charting the goings-on of the Employment and Social Affairs Council. I would long for a time when I could wander at will without the need to return to the straight and narrow. But I did have a slight fear. Perhaps when I could wander without restraint, its appeal would be lost.
Having been effectively retired now for almost a year I can announce that it hasn't lost its appeal. The ability to follow a thread - however pointless or aimless - is one of the great delights in my life. And the web replicates (and indeed surpasses) that University Library of my youth in the quantity and diversity of the material available. 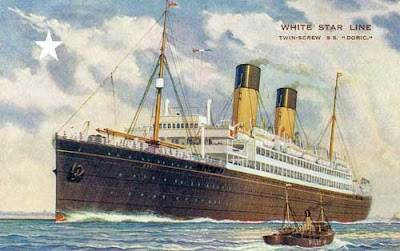 Take, for example, today. I came across a site where you could look up the passenger lists of emigration ships of the nineteenth and early twentieth century. I tested it out with one of Isobel's uncles (Samuel Usher) who we knew had emigrated to Canada as a young man. I eventually tracked him down, on board the White Star Liner "Doric" bound for Montreal, Canada from Liverpool in August 1923. Then - in the best traditions of a good wanderer - my focus of interest shifted to the ship itself. I managed to find a postcard depicting the ship and it looks quite magnificent. Furthermore, I discovered that when Uncle Sam travelled on it, it was only a few months old - its maiden voyage was June 1923. Even the history of the ship is fascinating. Here I am quoting from a wonderful site called lostliners.com

Oil-burning single-reduction-geared turbines geared to twin screws gave Doric a top speed of 15 knots, making her rather slow. Following the drop in passenger travel during the Depression years of the early 30's, Doric was refit for cruising in 1932. In September 1935 while returning from a Mediterranean cruise, she collided off the Atlantic coast of Portugal with the French cargo ship Formigny and was severely damaged below the waterline. Passengers were offloaded onto the P&O liners Orion and Viceroy of India. Doric's crew managed to get her to Vigo where temporary repairs were made. She then sailed for Tilbury where it was determined she was worth more as scrap, as the cost of repairing her was exorbitant. So ended her life at sea.