Another Book, Another House 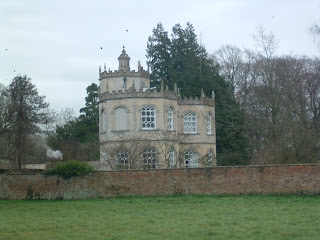 A few weeks ago I started planning another book. The theme was to be similar to that of A Proper Family Christmas, with an extended family forced together for a holiday, but this time I decided to have them hiring a lodge or a dower house or something attached to a stately home, whose occupants would also be characters in the book. And I wanted the heroine to be lured into spending the holiday with her dreadful ex in-laws because she was attracted by the intriguing architecture of the house they'd be staying in. I planned to do a little research on the internet after Christmas and find somewhere suitable to base it on.

So on Boxing Day, we went for a walk by the Gloucester & Sharpness Canal, which involved driving through the beautiful village of Frampton-on-Severn, with its huge village green. On the way out I admired the houses on one side (like my heroine, I'm a house freak), and on the way back I drooled over the houses on the other side. At that point I shrieked to Desmond 'Stop the car! That's exactly the house I want for my book! I must take a photo.' (see above)
When we got home, I looked Frampton up on the Web, trying to find out what the house was called. There was a village web-site with a similar photo of it, but unfortunately the pictures weren't labelled. However I clicked on 'properties', and that showed that the photographer had called it 'Theorangeryfromthegreen'. I remembered seeing an 'Orangery' page when I was looking up the website for Frampton Court (http://www.framptoncourtestate.co.uk/orangery.htm) so I went back. And there it was: 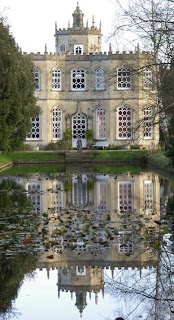 The house I'd glimpsed the back view of from the road just happens to be 'the prettiest garden building in England', one of the most unusual examples of 'Strawberry Hill' gothic architecture in the country, it belongs to the local stately home, - and they let it out as a holiday cottage! Spooky, or what? I know one thing, I'll have to write the book now.
at December 28, 2007