Fat Dog To The Big Apple : Week 34 Manchester To Albion "Amy and I left the small township of Manchester behind us and set forth in search of Albion". I realise that this sounds like the opening sentence of some early Victorian social reformers' account of his quest for the soul of the nation, but bear with me. The Manchester in question is the small township of Manchester in Mendocino County, California. Albion is a town some 25 miles further north up the coast. And Amy is my six year old soft-coated wheaten terrier. Together we are 34 weeks into a five and a half year virtual walk from Los Angeles to New York. Together we are sampling some of the delights of rural America without leaving the discomfort of our own cold, grey home.
One of the things about walking along this stretch of the Northern California coast is that there aren't many choices to make. There is only one decent road - Highway 1 - which heads north in one direction and south in the other. As long as you keep the sea to your left you can't go far wrong. It can get a bit boring at times but there is always something interesting to distract your attention.
Take, for example, the proceedings of the Irish Beach Architectural Design Committee. Irish Beach is a "second home and rental development" located about four miles north of Manchester (remember, this is Manchester California, we're not talking about Salford here). Such developments are springing up all over coastal California as city-dwellers go in search of idyllic country retreats. Government planning laws in the States are nothing like as strict as they are in the UK, but this does not mean that you can build what you want. In place of the Local Planning Department sits the Architectural Design Committees - collections of local citizens who decide what you can build, where you can build it, and - in some cases - what colour you can paint your front door. So the next time you get fed up with your local bureaucracy, have a read of the Committee Minutes and the extended discussions about the design, size and location of the sign outside the office of William Moore and be thankful that you are not a resident of this particular piece of the Land Of The Free.
A few miles further north is the Inn At Victorian Gardens, a very select little establishment which caters for the type of guest who likes good food, fine wines, tasteful furniture, spectacular coastal views and a generous dollop of American eccentricity. If you have a few minutes to spare, take a look at their website and, in particular, the Flash Presentation. It's a mixture of soft-focus, grainy art-photos and verse. For example, describing the overall ethos of the Inn, the poem states : "Time is taken / from the hands of an antique clock / and shaken out like fine linen / to remove its kinks". By the time you have read it all you are not sure whether it is rather good or just plain tacky. Fearing that she may have been "shaken out like fine linen", Amy was not keen to stay, she we kept on walking. 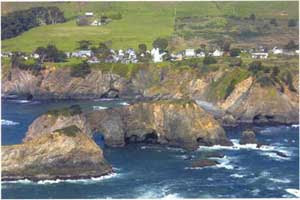 The next little town we came to was a small town of some 200 inhabitants and the wonderful name of Elk. Originally it had been called Greenwood, but then someone discovered another place with the same name somewhere else in the State, so they changed the name to Elk. Elk was a lumber town, its fortunes were built on the destruction of the great Redwood forests to the east of the coastal strip. The timber was cut at the steam-driven sawmill in Elk and then shipped out from the wharf. When the redwood ran out, Elk went into decline and by the 1930s had become a ghost town. It only began to slowly come back to life in the 1960s and 70s when this part of the coast was beginning to open itself up to recreational use. Now it has a generous collection of small hotels, inns and - for some unknown reason - massage parlours. 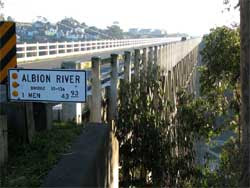 Our final destination for the week - the small town of Albion - was also a lumber town. The town was founded in 1853 when a retired English sea captain, William Richardson, built a saw mill there, the first saw mill on the Redwood Coast. Like most of its neighbours, the town has now lost its timber trade, but a lasting reminder to the power of wood in this part of California can be found in the wonderful wooden bridge that carries the coast highway over the Albion River. The bridge was built in 1944 when steel and concrete were in short supply. It is the last remaining wooden bridge on the coastal highway and has now become a tourist destination in its own right.