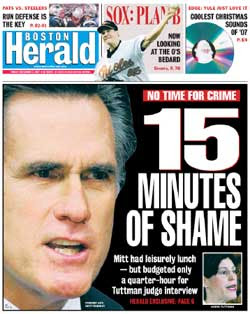 It never ceases to amaze me that pols have time to propose silly legislation to keep people from going onto a roof or spanking their children while spending $15 billion to construct a tunnel where the ceiling won't stay up. No wonder nothing gets done.

Kenneth L Bowers, Wolfeboro, NH.
The letter is from this mornings' Boston Herald which I have been reading as a sociological exercise. If you want to know what Middle-England thinks it is no use reading the Guardian or even the Daily Mirror. You need to read the Daily Mail. Equally, if you want to know what your average Joe in America thinks you need to avoid the New York Times or Washington Post and search out for something tabloid size with large banner headlines. And so I found the Boston Herald.
Open the Boston Herald and you feel you are in familiar, if slightly depressing, territory. The country is under attack from a demonic coalition of illegal immigrants, mamby-pamby do-gooders, gays and - worst of all - pols. It took me a while to work out the "pol" thing, simply because the word doesn't seem to have spread across the Atlantic yet (although as sure as eggs are bird flu it will be on its way). Pols are, of course, politicians.
If you read papers like the Boston Herald or the Daily Mail or any of the other 27,000 newspapers like them in the world, you can appreciate how much they first of all construct, and then feed off, a hatred of "pols". "They" are out to interfere, to stop us or make us, to tax us and bleed us. It is almost as if the philosophical principles of nineteenth century anarchism have been adopted by the global middle classes of the twenty-first century. The global nature of the threat posed by "pols" is neatly illustrated on page 7 where an article claims that the world gathering of "pols" to talk about climate change will produce as much greenhouse gas as 20,000 honest American citizens going about their lawful business in their SUV's for a year. But is this truly an anarchist creed? I doubt it. I suspect the bottom line will be down with the government and up with the residents' committee. And a good old Daily Mail / Boston Herald reading residents' committee at that.
Towards the end of their lives, my parents moved into an Old Peoples' Development of small flats: a little retirement community. It was populated by dozens of little, old, Daily Mail reading, lower middle class grumps. It was ruled by a Residents Committee made up of little, old, Daily Mail reading, lower middle class grumps. If my parents had lived in Boston it would have been made up of little, old, Boston Herald reading, lower middle class grumps. The Brighouse chapter of this clan were pretty typical. They had a loathing for change. The change my brother and I - on behalf of my wheelchair-bound father - were attempting to introduce was to have a ramp built so he could get his wheelchair up the one step into his ground-floor flat. This was opposed rigorously by the committee (at one point the actually said it would make the place look like an Old Peoples' Home!). At the end of the day, my brother settled the matter by turning up one day with a concrete mixer and building the ramp himself. The committee weren't pleased.
When it comes down to it give me the pols every day. No decent pol pretends to be sanctimonious anymore. No decent pol reads the Daily Mail or the Boston Herald. If one particular half-decent pol (Hillary Clinton) does happen to read today's' Boston Herald she will find the following charming cartoon which can be my submission in the cartoon of the day category. 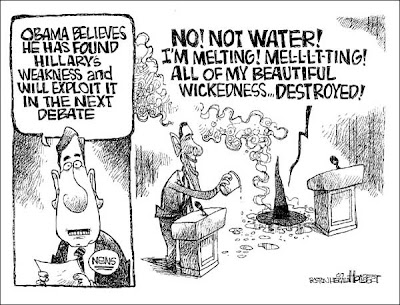