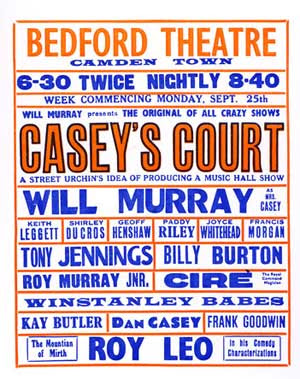 We are visiting Isobel's Aunty Rhoda who, aged 92, is now resident in a nursing home. For her age she does remarkably well, but she does tend to forget things and gets a bit confused at times. We tell her that her great nephew Alexander has been invited to an interview at Leicester Medical School. This news seems to pass her by, but a few minutes later she says: "I went to Leicester once, but I didn't like it. It was when I was on the stage". We all nod our heads and smile in the way that you do when an old person has said something a little batty. It's one of those "there, there" moments (as in "there, there love, drink your cup of tea") But then Isobel says "that's right Aunty, I remember my mother once telling me that you were on the stage as a young girl". I am amazed. I find it impossible to imagine Aunty R on the stage. She has many talents - few people I have ever met, for example, can deliver an insult like Aunty R - but I had never imagined that singing and dancing on the professional stage were amongst them.

I go into full investigative mode, if there is one thing I love it is what the press nowadays calls a "backstory". It turns out that Aunty R was a member of a troupe called the Winstanley Babes when she was young. They must have been reasonably professional and well-known as she was recalling performing for a week in Leicester which is a fair distance from her native Liverpool. The date - as best we were able to track it down - must have been in the late 1920s or very early 1930s. A little bit of web-based research when I got home revealed that the Winstanley Babes was not a figment of an old lady's imagination but a professional troupe active from the twenties up until the fifties and based in the North West. Jimmy Clitheroe - who went on to find fame on the radio - was an early member of the troupe. And so - it would seem - was Aunty R. I even tracked down an old theatre poster advertising a show featuring the Babes.

Aunty R will be coming for tea on Boxing Day. She might think that she is coming for a rare trip out of the Home and a chance to be with all her family. In fact she is heading for a session of detailed interrogation that would not be out of place in Guantanamo Bay. I want to know more about the Babes and the time they spent on the road. I want to know what she did, what she sang, what she danced. Aunty R will know it all - I doubted her memory once but now I have learnt my lesson. She might not know what day of the week it is or who the Prime Minister is (indeed, I've been having trouble with these two questions recently), but she will know all about the Winstanley Babes. And that's good enough for me.