Good On Australia, Lousy On The UK 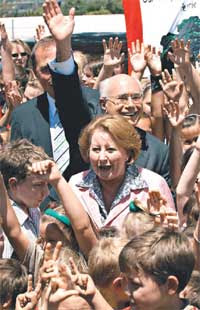 Ask me anything you want about the Australian election. You want to know it and I can probably tell you it. That is because each morning, as Amy and I take our walk, I listen to the Australian Broadcasting Corporation's podcast of the AM morning news report. The half-hour programme provides invaluable insights into what is going on in the country - the good and the bad, the positives and the negatives. Did you know, for example, that the incumbent Prime Minister has just promised to bring forward his proposed retirement age by six months if re-elected. Some incentive that.

Ask me anything you want about Manchester. I'm pretty hot on Manchester. That is because each morning, as Amy and I take our walk, I listen to BBC Radio Manchester's podcast - "Manchester On The Run". It's a good programme. You get a pretty good feel of what is going on in the city in just 7 or 8 minutes. Did you know, for example, that the former Manchester United player and "Busby Babe" John Doherty has just died at the age of 72. Sad isn't it?

Ask me anything you want to know about New York..... OK you know the rest. After we have finished listening to "Manchester on the Run" we listen to the podcast of the Front Page of the New York Times.

The point I am, with my usual circumlocution, trying to make is that the important elements of a good news podcast are (i) brevity; (ii) relevance; and (iii) timing. And there is currently a gaping gap in the market for a decent news podcast covering the UK. The BBC does one but it is not published until the day is nearly over and when it is published it does not score high in the brevity stakes. The Guardian does one but that again is late and discursive. Channel 4 News used to do a splendid one - The Morning Report - which ticked all the boxes. But a few months after it had won my coveted "News Podcast Of The Year Award" it was dropped.

So until someone spots the gap in the market and does something about it, I remain good on Australia, Manchester and New York but lousy on the UK. In the meantime, all I can do is tell you that the television ratings for the live coverage of the Australian Test Match dropped to an all-time low last week. Interesting, isn't it?.
at November 14, 2007