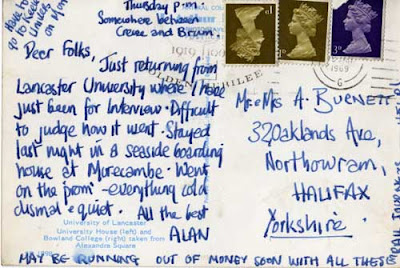 Good old serendipity strikes again. I was putting some photographs away in a large box when I came across a collection of old postcards which I must have taken from my parents house as we were clearing it out after they had died. Some are from me, some from my brother. One of the ones from me - dated January 1969 - has the picture of a typical 1960s concrete building on the front which turns out to be University House at the then, new University of Lancaster.

You can probably make out the message from the reproduction at the top of this posting. Discovering it just a few days before we head up to the North-East to take Alexander for the first of his university interviews provides an opportunity to examine some of the social changes that have taken place over the last 39 years.

The first thing to note is that, back in 1969, I was sat on a train and not been driven up to the interview by my interfering and over-fussing father. I have to say that the current arrangements are at my insistence rather than Xan's : he would far prefer to catch the train. However I remain convinced that he would get the wrong train to the wrong city on the wrong day. Thus poor Amy is going in kennels for a couple of days whilst the whole bloody family decamps up to Newcastle to make sure he makes it to the interview on time with his shoes properly shined.

Second please note my accommodation for the night - a seaside boarding house. I can still remember the dreadful place to this day. It was damp and bleak and very, very dark. The owner had installed these self-cancelling light switches which meant that as you climbed the endless flights of stairs you had to race at Hamiltonesque speed to get to the next light switch before the previous one went out. For Alexander's trip north we are staying with a friend just north of Newcastle. If that had not have been possible no doubt it would have been a Holiday Inn or Travel Lodge or something. The chances are it would have been difficult to find a boarding house even if we had wanted to examine that particular bit of Memory Lane.

But just has you think everything has changed you spot the final message - written in capital letters to ensure that my parents didn't miss it. "MAY BE RUNNING OUT OF MONEY SOON WITH ALL THESE RAIL JOURNEYS - HELP!". Ah, plus ça change.