Archive Of The Week : A Little So And So In The Old Bailey

My archive of the week is Old Bailey Online - The Proceedings of London's Central Criminal Court 1674 - 1913. This wonderful site provides full details of almost 200,000 criminal trials held at the Old Bailey and constitutes perhaps the largest body of such texts ever published. It is fully searchable and therefore you can have great fun checking back to see what your great, great, great, grandfather twice removed was transported to Australia for. But you don't need to be searching for a long lost great aunt or a felonious second cousin : you can just pick a date and dive in. The water might not be warm but you will be guaranteed a truly fascinating insight into life in previous centuries. For the purposes of this post I have chosen just one page (p.7) of the record for just one day (7th April 1725). The illustration at the top of this piece is of that page but I have provided the transcriptions of two of the trials covered so that you can get a flavour of what is available.
Elizabeth Mason And A Bit Of So And So;
The short text tells its own story and what a story it is. William Cowen (the prosecutor) claims that Elizabeth Mason stole 15 yards of cloth from him. Elizabeth claims that the cloth was given in exchange for a little "so and so". The cloth was undoubtedly handed over but Elixabeth wasn't forthcoming with the "so and so" and therefore he took his case to the court. The details are set out in the following extract. I think most fair minded people will be pleased to note that Elizabeth was not convicted.
"Elizabeth Mason , of Shadwell , was indicted for stealing 15 Yards of Cloth, Value 9 s. 6 d. the Goods of William Cowen , on the 10th of March last. William Cowen thus depos'd: I carry Cloth to sell about Streets. I met the Prisoner's Husband, who was my Ship-mate: He bade me call upon his Wife, to see if she wanted nothing in my Way, which I did. I afterwards miss'd a Piece, which I found where she had pawn'd it. The Prisoner thus made her Defence: When the Prosecutor came to my House, he was very rude, threw me upon the Bed, and swore that he would do so and so, whereof I would not let him; and then he said he would give me a Piece of Cloth to pawn, and he would spend all the Money upon me, and be merry, and do so and so; whereof he gave me the Cloth, and I pawn'd it, and we spent the Money; and then, because I would not let him do so and so, he said he would swear a Robbery against me, whereof he did. The Prosecutor was contradicted by his own Witnesses, and the Jury acquitted the Prisoner".
The Late John Guy And The Three Fallow Deer
Life was certainly cheap 280 years ago and if the case of John Guy was anything to go by it was worth about 30 shillings. That was the value of the three fallow deer he was accused of killing, a crime for which he was sentenced to death. The shocking details of the case are recorded as follows.

"John Guy , of Tuddington , was indicted, for that he, after the 1st of June, 1723. that is to say, on the 1st of September last, did feloniously hunt and kill three fallow Deer value 30 s. in a Paddock or inclosed Ground where Deer are usually kept, belonging to Anthony Duncomb Esq ; Charler George thus deposed: As I lay in the Lodge, I heard a Noise in the Park like the Squeaking of Deer, about Five in the Morning, and looking out of the Window, I saw the Prisoner and Biddesford (an old Man) standing together. I know not whether they saw me or no, but they presently parted and went towards the Pales. I slipt on my Cloaths, and follow'd with my Gun. The Prisoner stept to me with a Pistol in his Hand, and swore if I did not go back, he'd shoot me. I was not sure that my Piece would go off, and so I retreated, and found two Deer lying dead, and they look'd as if they had been torne by Dogs. In the mean time the Prisoner and Biddesford got over the Pales. It fell out that some Countrymen were coming by soon after without-side the Pales, (for there's no Foot-Path thro' the Park.) I cry'd out Thieves, and they join'd together to assist me. I got over the Pales, and there found another Deer with his 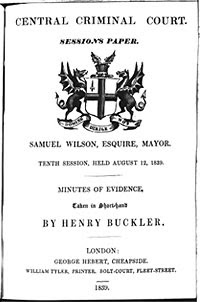 Throat cut, and not quite cold. The Prisoner and old Biddesford took their Way towards Roger's Ferry, and we pursued them. When they came to the Ferry, they turned about, presented their Pistols, and swore we were dead Men, if we came a Foot nearer. However, when they were gone off, we took a Boat after them: They landed at the Half-Mile Tree, (about half a Mile from Kingston) and we were not far behind them. Biddesford was shot in the Fields, and the Prisoner was taken in Kingston, with a Powder-Horn and naked Knife in his Pocket. The latter Part of this Deposition was confirmed by the three Countrymen that assisted C.George in the Pursuit. Guilty . Death" .

There are another thirteen cases on the same page, most of which result in someone being transported to Australia for stealing a pocket handkerchief or the like. They are shocking, the are disgusting (do not read the final case report on the page, I warn you!) but they are absolutely engrossing. Just about all the things a good archive should be.