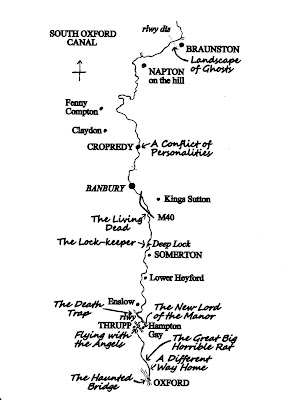 I feel a bit awkward interrupting Alan's superb social history researches, but I feel a need to display this picture.

As AB knows, Jane is due to publish on October 31st. a set of ghost stories based on locations on the South Oxford Canal. (It'll be available on Amazon.) There have been many discussions, Jane's even been to see Colin Dexter (of inspector Morse fame) to read him some of the stories (he loved them - as he should, they are absolutely superb. Of course people assume I say that because Jane's my wife - not so, I'm really rude if I don't like something she's written!)

However, the discussions included that there really should be a map. Jane was so worried about this I foolishly said "I'll do that!" Since I can't really draw, the remark came out of sheer male protective bravado and landed me with the awful problem of how to to create something suitable.

Eventually I found a method. I think it'll do - hope you all agree.

The stories themselves are much more fun mind you - I've just re-read the lot because Jane's sort-of-publisher had some suggestions were.... (woops, nearly wrote a rude word.) No question Jane's original (bar a couple of tiny things) was far better.

Only my opinion, of course. Just as it's my opinion AB's postings deserve an even wider audience.