Sepia Saturday 51 : A Royal, A Triumph And A Panther 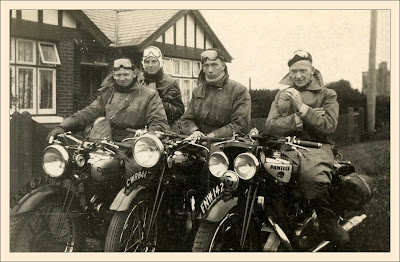 My Sepia Saturday post last week featured a picture of my mother and Charlie Pitts, a motorcycling friend from the 1930s. Several people asked for pictures of my mother and father in their motorcycling gear along with their motorbike.So here is a picture which must have been taken in the 1930s : and that is my father and mother astride the Royal Enfield on the left. Readers of last weeks' post will recognise Charlie Pitts on the Triumph in the middle and I am unsure who the fourth member of the group, the Panther rider, is.
I am no expert on motorcycles and I am sure there are plenty of people who are, and who will be able to add information about the three motorcycles featured in the photograph. A little Google research suggests that Panther motorcycles are now long gone, their manufacturer, Phelon And Moore, having gone out of business in 1967. Triumph motorcycles are still thriving and, I believe, are still an iconic brand in the motorbike world. I had assumed that Royal Enfield. like Panther, had long gone into liquidation, but I was surprised to discover that Royal Enfield motorbikes are still being manufactured in India. This, seemingly, makes Royal Enfield the oldest motorcycle brand in the world still in production. I rather think that my father would have been pleased about that.
THIS IS AN EARLY SEPIA SATURDAY POST - I'M AWAY THIS WEEKEND. FOR OTHER SEPIA SATURDAY POSTS GO TO THE SEPIA SATURDAY BLOG AND FOLLOW THE LINKS
at November 26, 2010