Kirklees Hall And The Slight Aftertaste Of Sadness 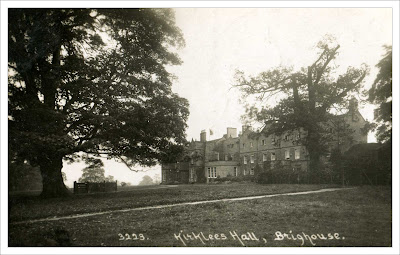 Kirklees Hall is just down the road from here, when there are no leaves on the trees you can just about see it. Built on the site of the 12th century Kirklees Priory (which was supposed to be the last resting place of none other than Robin Hood), the Jacobean Hall is a listed building which has now been divided up into private apartments (one is still on the market for just over £500,000 in case you are interested). The above photograph features on a W H Smith Kingsway Real Photo series postcard dating from 1914. The reverse of the card is as follows: 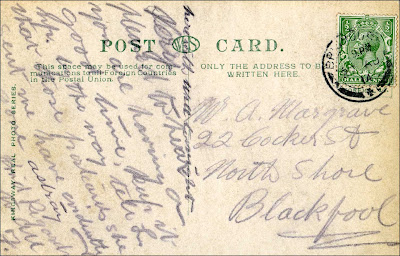 As far as I can make it out the message is as follows:
"Here with Will tonight. Pleased to hear you are having a good time, keep it up. By the way, tell L that those postcards she sent me have evidently gone astray. Kind regards to all. F"
As always, there are more questions than answers. Why was the sender staying at Kirklees Hall? Could the date of the card (27 August 1914) have anything to do with things? This was three weeks after the outbreak of the First World War and all over Britain, troops were on their way to join their regiments. Could the sender of the card be about to join his regiment and move to France? Who knows. But perhaps the slight aftertaste of sadness is a suitable memory on this particular day.
at November 11, 2010