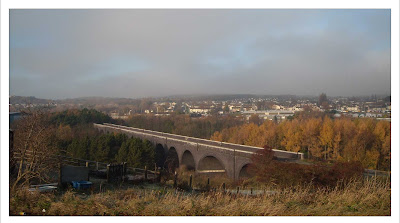 Amy and I decided to blow away the cobwebs of post-holiday lethargy by taking a walk over the magnificent Bradley Viaduct which forms part of the rather splendid Calder Valley Greenway. The viaduct was originally built in either 1867 or 1901 (depending on which version of history you subscribe to) as part of the extension of the Midland Railway from Mirfield to Huddersfield. Whilst the line was closed in 1937, the viaduct remained and for many years it was in a very dilapidated state, but in 2008 it was restored and incorporated into the new Greenway, a cycle and walking route between Huddersfield and Dewsbury. 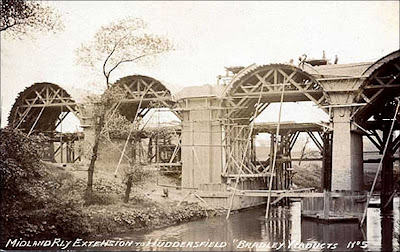 I have managed to track down an illustration showing a postcard which featured the construction of the viaduct, which suggests that the later of the two construction dates is the more likely. 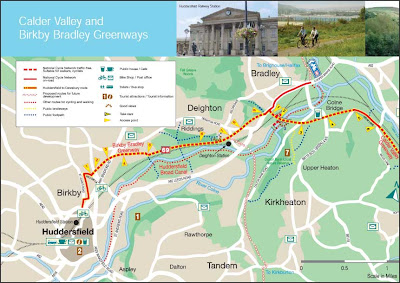 The grandeur of the viaduct combined with the crispness of a November morning was certainly invigorating (well, I found it so, Amy says it wasn't quite smelly enough for her), and it has prompted me to try and walk the rest of the Greenway over the coming week or two. I will report back on my progress.
at November 15, 2010