I used to have a cat called Stanley. That was my first thought on discovering that my eighth square would take me to the village of Stanley, about two and a half miles north-east of the city of Wakefield. I had never heard of Stanley (the village) and, as far as I knew,I had never passed through it. If it hadn't have been for the wonders of Google Earth, I wouldn't have known what to expect when I got there : Google Street-view and all the other virtual mapping applications have made life easy for the random traveler.

Stanley is the kind of place you would expect to find in West Yorkshire. When I started my Ten Square project, I half expected to come up with ten Stanleys. There are terraced houses, council houses, pubs and chip shops. There is an industrial memory of coal pits and stone quarries and a contemporary patina of small town industry and commerce. There is a bit of nature, but nothing profound. It is mankind that has left its mark on Stanley, and although that mark can be a bit shabby in places, there is a honesty about it which is as much a part of Yorkshire as the bleakest moors or the prettiest dales. 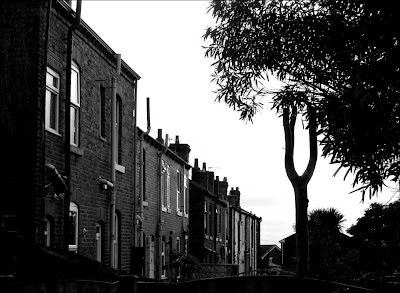 Like any good Yorkshire place, Stanley can trace its origins back as far as anyone could possibly want to go. Palaeolithic stone exes have been found here which means that there was the odd Saturday night fight after the pubs closed some 10,000 years ago. The Romans set up camp here, and after they had left a long succession of Angles, Vikings, and other miscellaneous travelling salesmen sailed up the river from the North Sea and plundered and pillaged their way through Stanley. 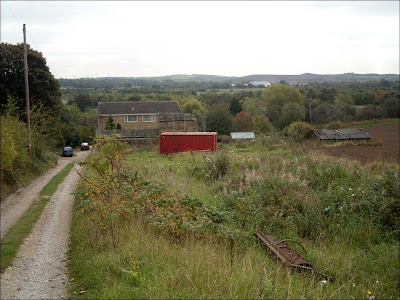 From the village you can look down the sloping ridge to the River Calder and you can see why it was a popular spot. You can also imagine the miles and miles of woodland that used to stretch as far as the eye could see and appreciate why Stanley - along with, it must be said, every self-respecting village between Nottingham and Leeds - makes its own claim to being the home territory of Robin Hood. There was even a minor battle fought here during the English Civil War, once again illustrating Stanley's role as being one of the busiest bit actors in English history. 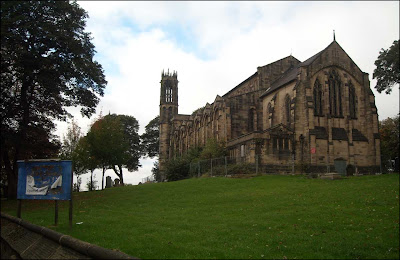 My square was dominated by the great ruin of St Peters' Church, Stanley. The first church was built on this hill that overlooks the village in 1825 but was almost totally destroyed by fire in 1911. Another building was soon put up on the same site and the solid and fine-looking church was re-opened in 1913.

The new building may have looked solid but within 90 years it had to be abandoned (in 2001) when major structural cracks began to appear and the building was declared unsafe. And so it stands today : boarded-up. empty, strangely threatening, like a massive stone reminder of something. And you can still walk around the grounds, still walk through the graveyard, still look up at those massive stone walls as you try to work out what it is trying to remind you about. Maybe it has something to do with man's insignificance in the universe, maybe it has something to do with the dangers of building on land riddled by old mine shafts. 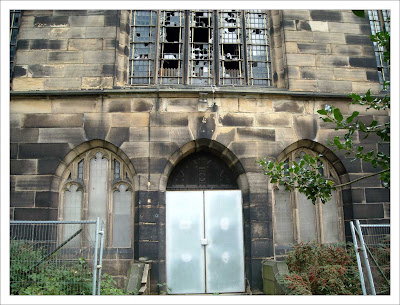 During the 1950s Stanley played host to another burst of building activity, this time houses. The new estates just next to the church were part of the great attempt to provide decent houses for all in the post-war world. During the last half of the twentieth century plenty of criticism has been directed at this type of 1950s and 1960s Council House estate, but the one in Stanley looks neat, tidy, generous, and the kind of place I would be more than happy to live. 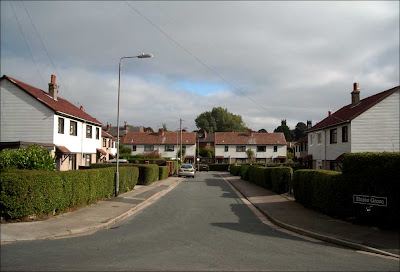 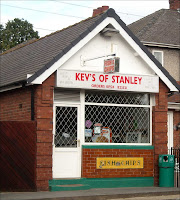 What more could you want? A Fish and Chip shop? Well there's two. A pub? Well there's probably half a dozen. There are shops and schools and little patches of grass with a slide and some swings for the kids to play on. It may not be the most beautiful place in West Yorkshire. It may not be the grandest, or the oldest or the newest. But it feels like home and it feels like Yorkshire, so what more could you possibly ask for? 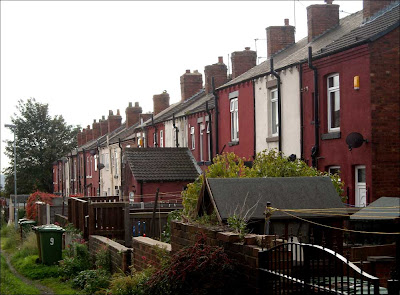