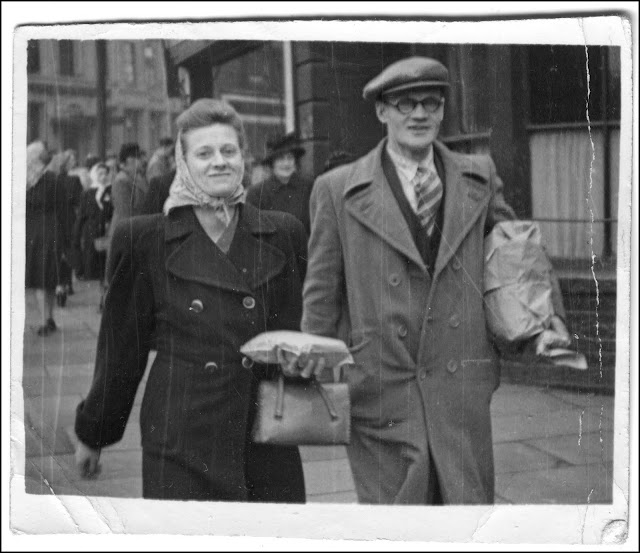 I am staying with the Family Stash, but by chance I seem to have almost managed to get on theme this week. The theme was a railway parcel office and here we have a photograph of my Uncle John and Auntie Doris carrying brown paper parcels. I suppose the photograph was taken in either the 1940s or the 1950s : and back in those days people did seem to walk around and awful lot with brown paper parcels tied up with string under their arms. What on earth was in hidden away in there?

John Arthur Burnett was born  in 1899. He joined the West Riding Regiment in 1916 and was eventually transferred to the Western Front. In June 1918 he was posted missing but it later emerged that he had been taken a prisoner of war. In 1922 he married Susannah Cooper and they had, I believe, two children - cousins who I have never met. A few years later, John and Susannah were divorced and all contact with his first family was lost. In 1948 he married for a second time to Doris Metcalfe - Auntie Doris.

There is a host of stories I could tell about Uncle John and Auntie Doris - they were both characters in their own way. But those stories will have to wait : for the moment let us just wonder what might have been in those brown paper parcels.

There are lots of splendid things tied up in the digital brown paper parcel that is called Sepia Saturday. To untie the string, just go along to the Sepia Saturday Blog and follow the links.
at September 17, 2011