Some days you just wake up and feel older than your years. Your muscles ache and your bones have an archaeological feel about them. With me, it is normally the result of satisfying my well-documented love of beer a little too enthusiastically : but not always, as the next dip into the archives shows. Let me take you back to March 2009. 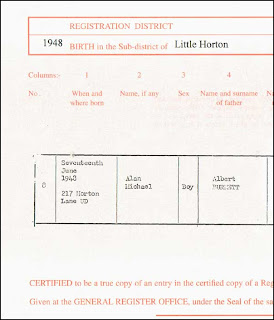 News From Nowhere : Monday 2 March 2009
How An Old Typewriter Ribbon Made Me Feel Suddenly Very Old

For the last few months I have been caught up in a Kafka novel. It started with a letter from some Government Department - God knows which, they change their names so often in order to re-brand themselves - which stated "According to our records you are now sixty and therefore entitled to Old People's Winter Fuel Supplement". There was a form to fill in which I duly completed and this gave rise to a second letter from another Department - or probably the same one which had re-branded itself in the week or so since the first letter - which said that they couldn't pay me the Allowance because they needed proof that I was old enough to receive it. I tried the approach of "I have a letter from you saying that I am entitled to it ..." but this got me nowhere. I was told that I would need to write to another Government Department and get a copy of my birth certificate. This I did, enclosing my £8 fee.

So this morning the copy of my birth certificate arrived. I cannot recall ever having seen a copy of it before and therefore the first thing I did was to double-check that I wasn't adopted (for many years I have had a strong belief that I am the last surviving Romanov) but there it was in black and white, I was the son of Albert and Gladys Burnett. The shock came when I checked my date of birth only to discover that I was born on the 17th June 1943 and not, as I thought, the 17th June 1948. This is the kind of news that can have a profound effect on a person and it is no exaggeration to say that in that moment I aged five years. Trust me, a lot runs through your mind when you discover that you are five years older than you thought you were : your bones ache a little more, your eyes get a little dimmer and, if you are lucky, you forget the name of the Prime Minister.

It was whilst I was planning what to do with my back-pay from the Old Age Pension people that I examined the rest of the certificate a little more closely. When I came to examine it my mother wasn't Gladys BURNETT but Gladys DURIIETT. And here was a surprise, my second name - which I have always assumed was Michael - was in fact IIichael. Even worse, I wasn't a BOY but a DOY! And come to think of it, I couldn't have been born in June 1943 because if I had that would make me just five weeks older than my brother which, I suspect, is physiologically impossible. It was 1948 I was born, I'm sure of it. And wasn't 1948 the time of post-war economic desperation. The cold winter, the country bankrupt by the war and in debt to America. Belt's were being tightened all over the place. I could almost imagine the wording of the Memo which cam from the head office of the Government Department (no doubt the same Government Department that sent me a letter sixty years later plus or minus a few re-branding exercises). "Every effort must be made to save money and, in future, typewriter ribbons will only be replaced after six months of usage. By order of TIIE DEPAIPTIIENT OF IADOR"

It is a good example of blogging about something and nothing - and that is the real joy of blogging. It can be about something (the state of the world economy) or it can be about nothing (lamp-post design in the 1980s) - the choice is yours and yours alone. After years of penning worthy articles about European Union Directives on Employment and Social Affairs, it was such a sudden burst of freedom to be able to write about something and nothing, it was almost life-enhancing. I suppose it made me feel five years younger, which in view of the above story, was not a bad thing.
at September 14, 2011