Sepia Saturday 94 : A Brace Of Walkers 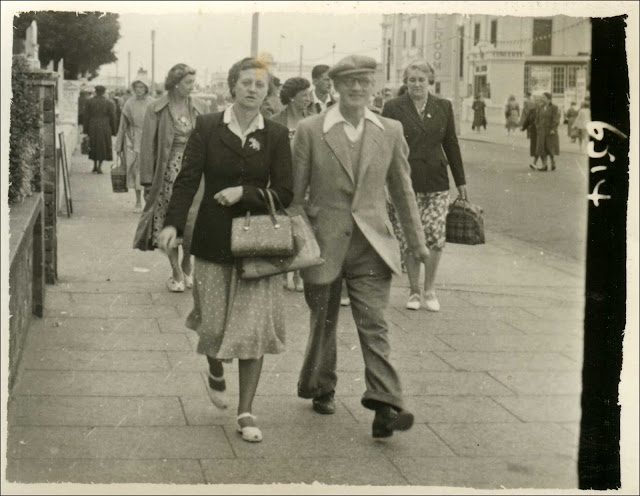 I missed out on a Sepia Saturday post last week so I have allowed myself two dips into the Family Stash this week - and I came up with a brace of walking snaps. My last Sepia Saturday post had a picture of Uncle John and Auntie Doris complete with brown paper parcels. Well, here they are again, still walking, but with no parcels this time (unless they are concealed within one of Doris's bags). The interesting thing is that once again they are striding along a street - and unless I am very much mistaken, this is the seaside resort of Blackpool. One striding photo might be chance : two such photos and it has to be a Walking Snaps photograph. Granted, the Blackpool variety has none of the polish of their Bridlington cousins, but the chance capture of a happy holiday couple doing battle against what looks like typical Lancashire weather has all the ingredients of the Walking Snap genre. 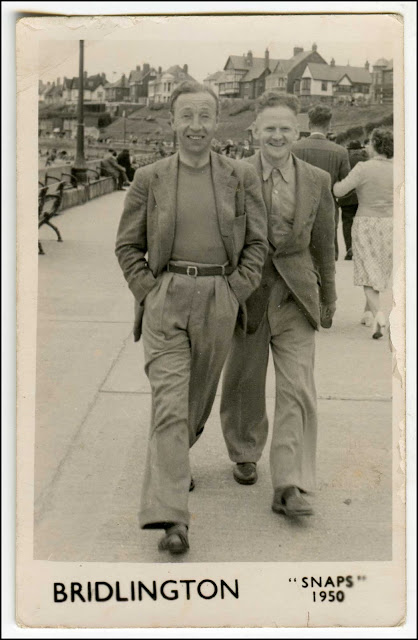 My second image is the real McCoy : a Bridlington Walking Snap of the same vintage as the one features in my Sepia Saturday 89 post. And it is a perfect match, because whilst #89 showed my mother, Gladys, and Auntie Annie, this one shows their other halves - Uncle Harry (left) and my father, Albert (right). The stylishness of Annie in the earlier photograph is matched by Harry's casual jacket and vest (it is probably slightly too early to call it a T-shirt, but what Harry was wearing in 1950, Marlon Brando was wearing a year later in Streetcar Named Desire). Albert is slightly more conventional in dress, but look at that head of hair - a mating pair of sparrows could nest in that.

Where were the two of them off to?  The background doesn't match the earlier photograph of Gladys and Annie so it is unlikely that it was taken at the same time (and if it was, where are my brother and myself). From the smile on their faces, I rather suspect that Roger and I are happily playing on the sands with Gladys and Annie, and the menfolk are just about to call in for a lunchtime pint. The very thought of it makes me thirsty - so I will leave you to have a look at all the other submissions for SEPIA SATURDAY 94 (follow the links from the Sepia Saturday Blog) whilst I just go and pay a call.
at September 30, 2011