Riding In The TT Races 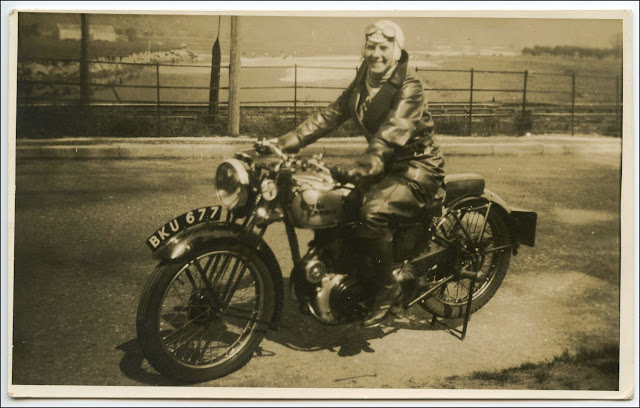 It was my mothers' birthday last Saturday - she would have been 102. And that means that it is just ten years since she died. This photograph of her was taken in the 1930s when both her and my father we keen motorcyclists. One of their favourite destination in summer was the Isle of Man where they would go to watch the famous TT Races. Motorcycle racing was a massively popular sport eighty years ago, and coachloads of folk from the northern industrial towns would make for Liverpool and Heysham in order to get the ferry over to the island. There was even a George Formby film called "No Limit" about the races in which he sung his famous song, "Riding in the TT Races".


Although the island is less than 150 miles from where we live, I have never visited it and I have always had difficulty imagining what this small island in the middle of the Irish Sea was really like. I was saying this some time ago to our friends, D&S, and on one of those whims that make life worth living, we all decided to go. And so as you read this, the four of us will be on our way to Liverpool to catch the ferry to Douglas in the Isle of Man. We are only staying a couple of days so I will be able to report back to you later in the week. Until then, here is a flavour of what the island was like back in 1935, from that George Formby film. And don't worry, I will steer well clear of motorbikes.