Politics And The Co-op Brass Band 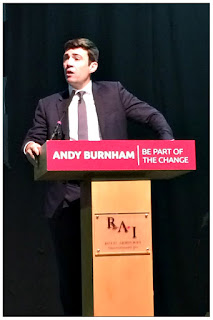 I went to the Royal Armouries in Leeds last night listen to Andy Burnham, one of the four candidates in the current Labour Party leadership campaign. Given that the contest now seems to be coming to life (American readers can think of it as a kind of Primary contest in order to pick the person who will lead Labour for the 2020 General Election), the venue for the meeting might have been rather suitable. 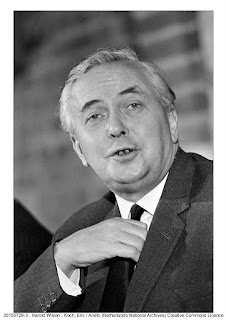 As I listened to him calling for a revival of the spirit of 1945 (and that great, reforming post-war Labour government) and setting out what the Labour Party should be campaigning for in the twenty-first century, I couldn't help thinking that the rather slick and media managed performance was very different to the last time I went to Leeds to listen to a Labour Party leader. That was back in 1966 - before Andy Burnham was born! - and the leader (and Prime Minister) in question was Harold Wilson. He was speaking at Leeds Town Hall and behind him were the uniformed ranks of the Co-operative Wholesale Society Brass Band. Before he came on stage they played a selection of Socialist anthems and then onto the stage strolled Harold, smoking his pipe and talking about his vision of the future. Last night there was no brass band, just a couple of Soap stars to introduce the main speaker. But Andy Burnham spoke about his vision for the future with almost Wilson-like conviction. If I get the opportunity I will go and listen to the other contenders - who knows, one of them might have brought along the Co-op Brass Band.
at July 29, 2015