Sepia Saturday 290 : On The Boardwalk With Grandma Kate 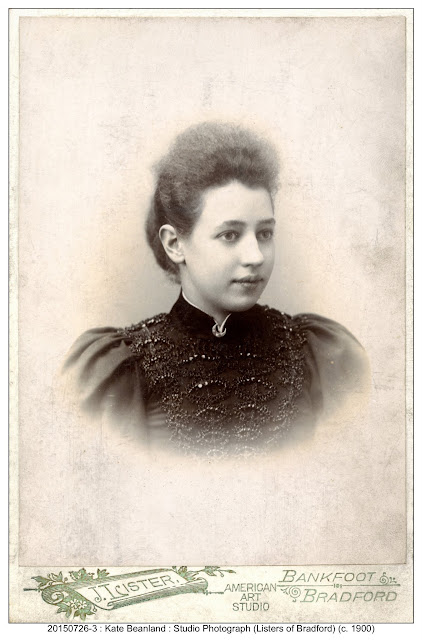 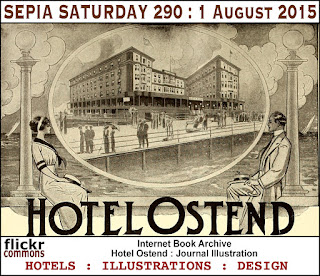 To the best of my knowledge my grandmother, Kate Beanland, never went to Ostend; and I can pronounce with an even greater degree of certainty that she never stayed at the Hotel Ostend in Atlantic City. It would therefore be a perfectly reasonable question to ask why, given that the prompt for Sepia Saturday 290 features the said hotel in all its wooden glory, am I sharing a Victorian portrait of my mothers' mother. The answer is that the rules of Sepia Saturday allow the most relaxed interpretation of what passes for a weekly theme (I know they do because I made them up) and this week I am going to embrace thematic relaxation in the company of a lady I can only just remember.
Catherine "Kate" Kellam was born in the village of Morcott in Rutland in 1877, the second daughter of a strangely itinerant grocer, Albert Kellam. The family moved to South Wales where her father died when Kate was just 13 and later to Middlesborough in the North East of England. By means that are uncertain in fact and clouded in family rumour, she ended up working as a barmaid in Keighley at the turn of the century and it was there, in the best Beanland traditions, that she met my grandfather (yet another of those endless Alberts).

She lived the rest of her life in Keighley and Bradford and died in 1960 when I was twelve. I remember going to see her (she lived with my mothers' sister Amy and her husband) and recall a little old lady with false teeth and spectacles who smelt vaguely of camphor balls. The image is a hundred miles from the rather pretty young woman in my main photograph and a thousand miles away from the exotic sophistication of the Hotel Ostend in Atlantic City. 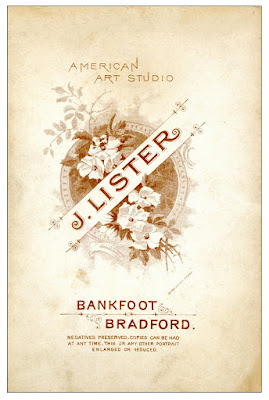 But it doesn't take much effort to start constructing connections. Where did Albert Beanland meet is wife to be other than in the King's Head Hotel in Keighley: so that means we have a hotel connection straight away. The hotel might not have been in America, but take a look at the studio where Kate's portrait was taken and you have the grandly named "American Art Studio" of Mr J Lister.

But it is the design of the reverse of the studio portrait and the advert for the Hotel Ostend that is my favourite connection - that harmony of design, typography and line drawing that is such a feature of the period - whichever side of the Atlantic Ocean you happened to be on.

Kate Beanland may not have been to Atlantic City in her lifetime, but - in my mind - she is accompanying me there now. Her camphor balls and wire spectacles have been left behind and she is as beautiful as she was when she was 23. We walk along the boardwalk, tasting the salty spray of the Atlantic waves. People speak in strange and exotic accents and we are thousands of miles from the woollen mills of Yorkshire. We sit for a second, leaning against two lamp-posts on the sea wall and look back at the Hotel Ostend and think, "what a strange world this Sepia Saturday allows us to inhabit".