Sepia Saturday 288 : Gimmie A Pigfoot And A Bottle Of Beer 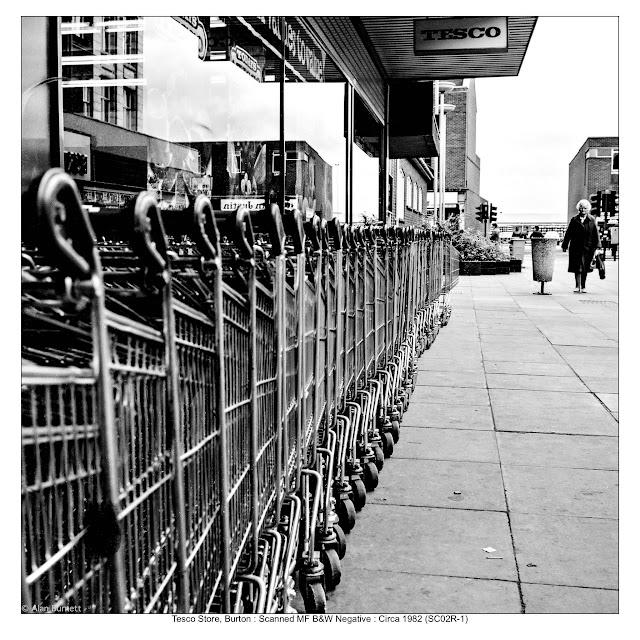 Our Sepia Saturday theme image for this week shows an old butchers shop with some pig carcasses hanging outside. I don't think I can match either the pigs or the specialist shop, but my photograph does manage to capture a particular moment in retail evolution - the shopping street supermarket. I took the photograph in the early 1980s and, as far as I can remember it was taken in the town of Burton-on-Trent. I was there taking a series of photographs of the great breweries of that splendid town: in the 1980s beer still flowed down the streets of Burton, metaphorically at least. It was towards the end of an era when breweries were central to many of the towns and cities of Britain, standing proud like some nineteenth century commercial castle in the centre of towns, spreading their rich aromas of hops and malted barley. And it was a time when food shops were still clinging to their town centre locations, even if the small independent butchers and bakers and greengrocers had already started to be replaced by the supermarkets.

During the next couple of decades the behemoths of both the brewing and the retail world would quit town centres - making for the out of town industrial and retail parks. Food - be it loaves of bread, tins of soup or pigs' feet - would be sold under cantilevered concrete and glass roofs amid tarmac car-parks. Beer would be brewed in aluminium silos in sterile anonymity.

But before we drown in the flood waters of nostalgia, it is worth noting that there has been the beginnings of a reverse in the trend towards the soulless. The big supermarkets got it wrong in believing that shops would become ever-bigger and ever more marginalised, and are rapidly reintroducing "local stores". The big brewers were mistaken in the belief that bulk quantity and rigid standardisation would always rule the world and the last ten years has seen a wonderful revival in small breweries producing a liquid cornucopia of tasty beers. Small specialists shops are making a bit of a comeback in our towns and it may not be too long before the descendants of Mr J Morgan will open a pork butchers near you.

Until that time comes along you can occupy yourself by going over to the Sepia Saturday Blog, and whilst you read the posts, you might want to listen to Billie Holiday singing.
at July 18, 2015