Shoppers Of The World Unite

It is getting to that time of the year again. It happened last Wednesday and then again on Thursday. It will be happening tomorrow and yet again on Wednesday. You know what I am talking about - shopping. Last Wednesday I had to navigate my way around the Meadowhall Shopping Centre and I am due for a return visit this Wednesday. Whenever I have to step through the plate-glass portals of some retail metropolis I cast a secret curse against the person who invented such instruments of torture and wish I was sat at home, in the peace and quiet of my room, sorting through a pile of miscellaneous ephemera. 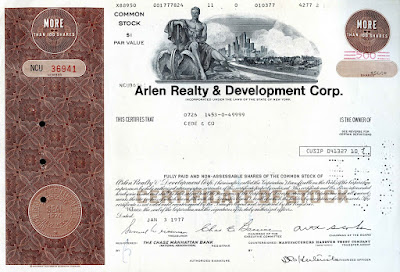 Like my collection of old share certificates and this lovely example from the Arlen Realty And Development Corporation of New York City.  The company was formed in 1959 by Arthur G Cohen, Arthur N Levien and Marshall Rose and quickly began specialising in developing retail shopping centres in the United States. By 1972 Arlen owned over 42 million square feet of American shopping centres and built developments such as Olympic Towers in New York and shopping centres in almost every state in America. 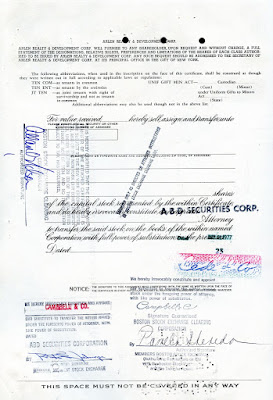 Most of my old share certificates have no value at all - they are certificates in companies long gone, bought for a few pence for their decorative value only (I have a long-term plan to re-paper my office with old share certificates). But as I searched the Arlen Certificate for a cancellation stamp and the business pages for a note of the company closing down, I began to suspect that this certificate may be the exception to the general rule. Perhaps I do own 500 shares in this retail conglomerate. As I walk through the doors of Meadowhall on Wednesday I will sing a little hymn to Mr Cohen and his friends who invented the wonderfully rewarding concept of the modern shopping centre.