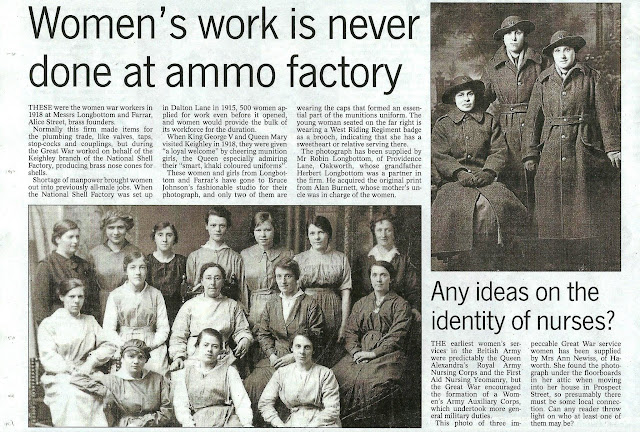 The wonderful thing about old photographs is that, unlike rolling stones, they gather a moss-like patina of information. Bits of history stick to them - memories of people and places - as the circulate from hand to hand or computer to computer. 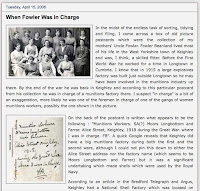 Take for example the old photograph of a group of munition workers dating back to the First World War which was part of the collection of my Great Uncle Fowler Beanland. On the reverse of the photograph he had written "Munition workers at Mssrs Longbottom and Farrars, Alice Street, Keighley, 1918, during the Great War where I was in charge."

Back in April 2008, I featured the image in a blog post and there it sat for another seven years, awaiting a stray memory to stick to it - which eventually it did late last year.

Then I received an email from the grandson of Herbert Longbottom who was a partner in the firm of Longbottom and Farrar. He was intrigued by the photograph and I sent him a high resolution scan of the original image along with what little information I had about it. He asked whether I would agree to share the image with readers of the Keighley News and I was delighted to agree. And so, at the beginning of this month, it was featured in the newspaper and almost immediately brought a response from the daughter of one of the women who was featured in the original photograph - Olive Driver who is sitting second from the left in the middle row of the first photograph. She also had a photograph of her own of a similar grouping of munitions workers from around the same time which she has shared with us. 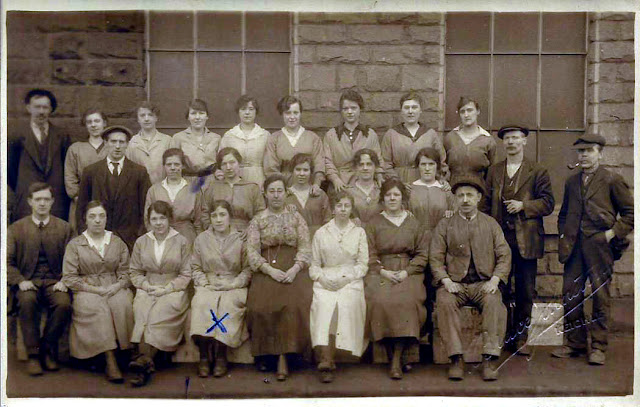 So as this new image is passed from one lover of old photographs to the next, perhaps it too will attract the kind of memories that are the very moss of history.
at February 23, 2016