On A Charabanc Trip To Obscurity 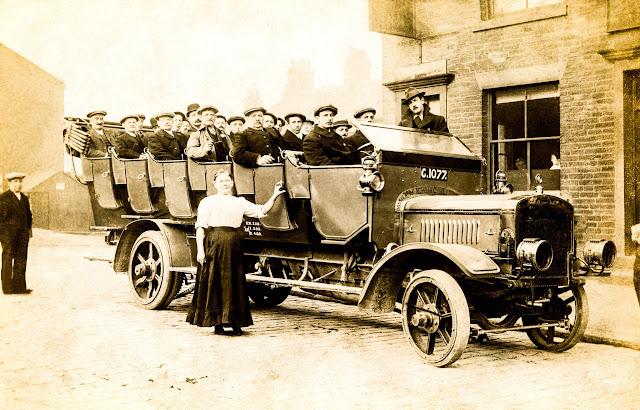 This is another of Rock Tavern Jack's photographs which we have both examined in great detail in order to find a clue as to its location - but with no success. It is obviously a loaded charabanc about to set off an an outing to the seaside or a race meeting or some such venue. The date is probably the first two - or at a push three - decades of the twentieth century. It is almost certainly a pub trip, and that is the pub just behind the "chara" : but the pub signage is too indistinct to read. The chances are that the pub will have been somewhere in the Halifax area as that is where Jack's family come from.

I am reproducing the image here for a couple of reasons. First of all it might be that somebody can possibly identify the scene. I have checked through Stephen Gee's excellent two volume history of Halifax Pubs to see if I can recognise the building but I can't. The last time I featured one of Jack's photos, Stephen was able to provide background information and we may be lucky again.

The second reason is just that it is a magnificent photograph. Look at that line of Yorkshire faces - as iconic and as memorable as anything you would find on Mount Rushmore. And look at that charabanc - the Suffolk Punch of motorised transport. It is eighty or ninety years since charabancs were seen on English roads. Their demise is rather sad: the modern-day hen-night stretch limo could not hold candle to these magnificent motorised beasts. It would appear that their journey to obscurity has reached the terminus - in 2011 Collins Dictionary finally removed "charabanc" from its lists.
at February 05, 2016