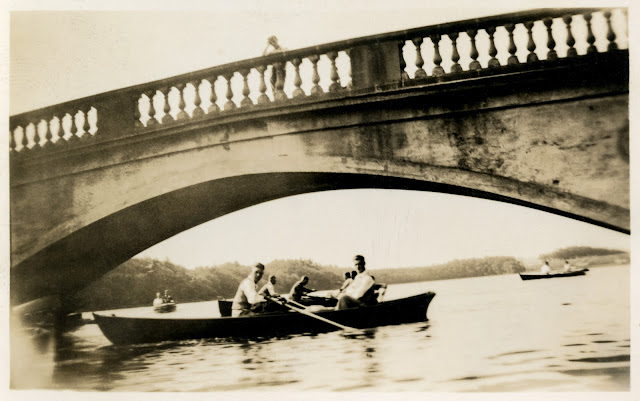 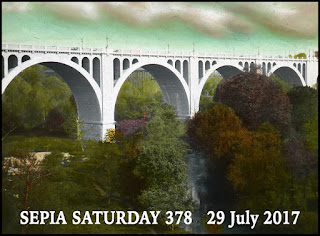 I am taking a short break from my "Standing Around" series in order to bring you someone who is "sitting around", and - more importantly - sitting in a rowing boat under a bridge. The bridge is important because it is my slightly laboured link to this week's Sepia Saturday theme image, which shows a picture of Taft Bridge in Washington DC. It must be admitted that Taft Bridge is a far grander structure than the bridge over Stanley Park Boating Lake in Blackpool, but a bridge is a bridge wherever it may be. My bridge forms part of a photograph taken by my Uncle Frank, and, because it is a Frank "The Cataloguer" Fieldhouse photo, I can tell you it was taken in Stanley Park, Blackpool in 1940. The importance of the date is clearly indicated by the next photograph in the album: Uncle Frank had swung the camera so that the lens was pointing to the sky and way up above you can just make out a warplane on patrol. He captioned that particular shot "Just A Reminder", and the two photographs together should, if nothing else, remind us of the importance of bridges. 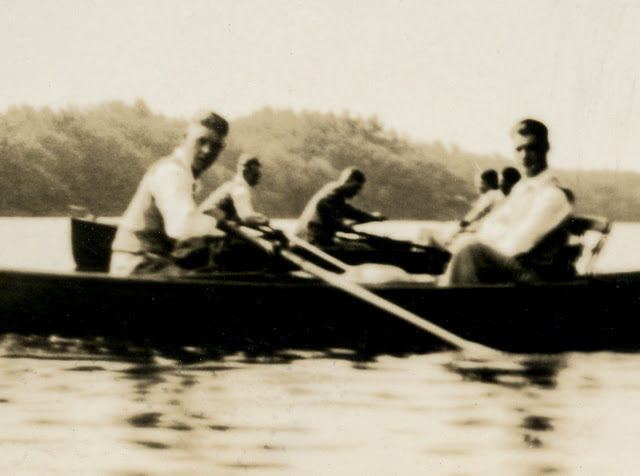 Bridges join people and places together and allow relaxed passage for all. I always used to think that one of the great achievements of my postwar generation was that we had successfully constructed bridges following the madness of twentieth century wars. But as I watch some of those bridges being demolished and insularity coming to the forefront, I find myself questioning the value of this legacy.