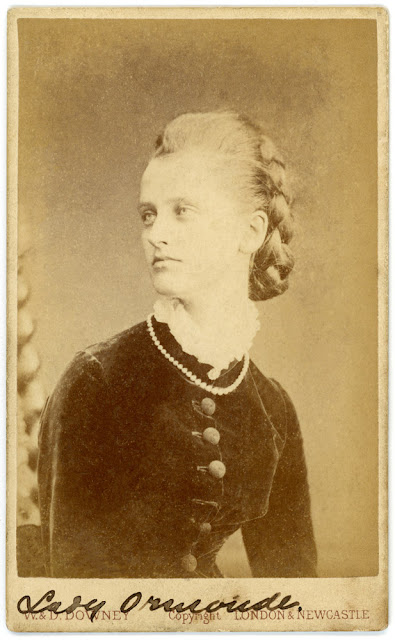 My third £1 purchase from the second hand stall in Slaithwaite was this delightful nineteenth century carte de visite from the London Studio of the society photographers William and Daniel Downey. William Downey (1829-1915) was born in South Shields and worked as a carpenter and boat builder before opening his first photographic studios in South Shields in the 1850s. By 1872 he and his brother Daniel had opened several studios in the North East, and William made the move to London to open studios on Ebury Street. He photographed both Queen Victoria and the Prince of Wales and received a royal warrant in 1879.

This particular photograph is a great find because, not only is it a fine example of the work of the Downeys, but it also records who the sitter was: Lady Ormonde. Elizabeth Harriet Grosvenor was born in 1856, the daughter of the 1st Duke of Westminster, one of the richest men in Britain at the time. In 1876 she married James Edward Theobold Butler, the 3rd Marquis of Ormonde and was styled the Marchioness of Ormonde. She would have been around 26 years old when this photograph was taken, by which time she had two daughters – Beatrice and Constance. Her husband was a regimental colonel, a Commodore of the Royal Yacht Squadron, a Vice-Admiral of Leinster and just about everything else you could make up, and remained so until he popped his aristocratic clogs in 1919. His wife survived him by nine years, before finishing up as just a photographic memory on a Slaithwaite second-hand stall.
at October 06, 2018