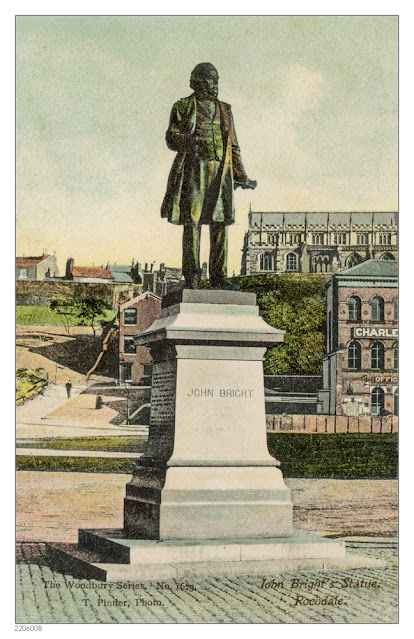 If I've inherited my love of collecting things from anyone, it must be from my Great Uncle Fowler Beanland. Uncle Fowler - whose name was always pronounced "Fooler" within the family - was an avid collector of picture postcards during the early years of the twentieth century. His collection of cards was housed in a double-fronted pasteboard-backed album, and upon his death in 1959 the album was passed on to my mother, Gladys, and thirty or so years later, it came into my hands. I have always intended digitising the cards and using them to piece together elements of the life of Fowler and his relatives; but, like so many things, I have never got around to it. So I am going to make a start now, and rather than a structured chronological review of the hundred or so cards in the collection, I am just going to jump straight in and hope that a story emerges as I work my way through them. So, for no particular reason other than it was at the top of the pile, let us start with a statue of John Bright, and a card posted in March 1906. 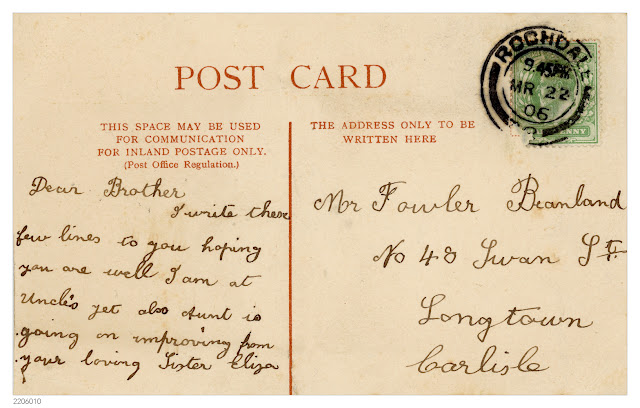 The card was from Fowler's sister Eliza Ellen Beanland who was, at the time, living in Rochdale. It was sent to Fowler who was also living away from his native Keighley, in the town of Longtown, near Carlisle. The reasons for these two divergent addresses will, I suspect emerge as we work our way through the collection. However, we can see from this card that Eliza was in Rochdale looking after and Aunt who had been ill

John Bright - the subject of the statue depicted on the postcard - was an important figure in nineteenth century political history. Born in Rochdale, where the Bright family owned and operated a cotton mill, Bright became one of the leaders of the Anti Corn Law League in the 1830s and later he was elected a Liberal Party Member of Parliament,  where he held office in the governments of William Gladstone in the 1860s, 70s and 80s. He also played an important part in ensuring that the British Government did not intervene in favour of the South during the American Civil War. Historical characters are rarely one-dimensional however, and during his time in Government, Bright opposed factory reform, trade union rights and votes for women. His statue still stands in Rochdale today.

Our first dip into Fowler's cards may not have told us very much about his life, but at least our knowledge of nineteenth century politics has improved slightly. 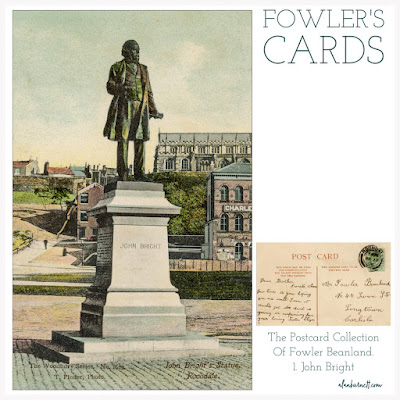