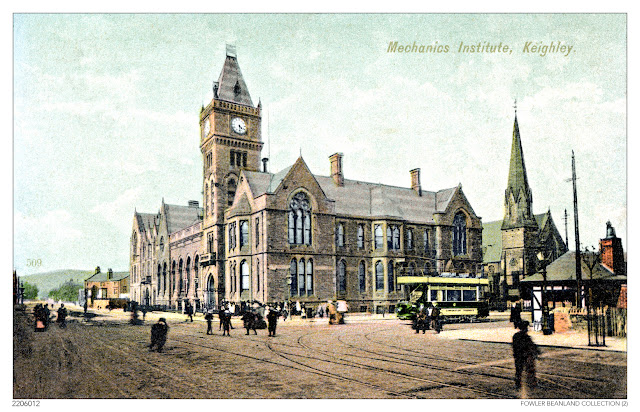 The second of the cards from my Great Uncle, Fowler Beanland's postcard collection shows a view of Keighley Mechanics Institute, which is quite appropriate, as the Beanland family were rooted in Keighley and they were mechanics of one sort or another for generation after generation. The Mechanics Institute was a fine building that stood at the junction of North Street and Cavendish Street until one fateful night in 1962 when large parts of it were destroyed by fire. What remained of the building was demolished five years later and the site was used for a new, but far less architecturally inspiring, Technical College. Much of that unlamented building has itself now been demolished, leaving a somewhat uncertain green space where the Mechanics Institute once stood. Fowler Beanland will have known the Institute in all its glory - it was built a couple of years before he was born and it burnt down a couple of years after he died - and he no doubt studied there when he was learning his trade. Keighley was a town of textile machines, a town populated by people who helped to build and service those machines, and it was those skills that took Fowler away from his home town to work in Longtown in the first decade of the twentieth century. 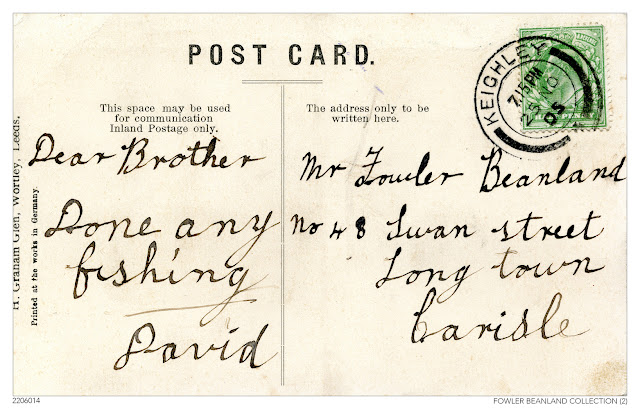 The card was sent to Fowler in November 1905 by David Beanland, at the time just sixteen years old. The message is a simple one - "Done any fishing?". Interestingly, David addresses Fowler as "Dear Brother", although he was, in fact, Fowlers' nephew, being the child of Fowlers' brother, Arthur Beanland, and his first wife, Clara Hargreaves. Clara died at the time David was born, and the young baby was brought up by Fowler and Arthurs' parents as part of their family.
By the time of the 1911 census, Fowler had returned to Keighley and was living with his sister, Eliza, and his nephew, David, on Smitherds Street, Keighley. Both Fowler and David were listed as "Engineers - Iron Turners": they were both Keighley mechanics. 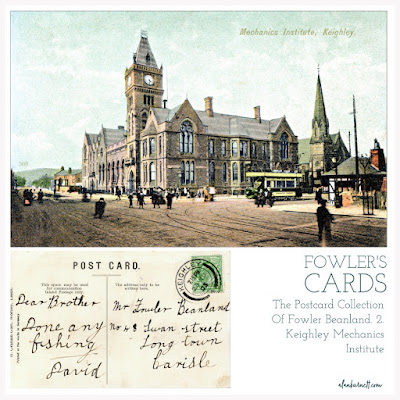