As Amy and I passed through Santa Cruz a few days ago on our virtual walking tour which is taking us from Los Angeles to New York (see Fat Dog To The Big Apple) we passed New Brighton State Beach. Just seeing the name on a map transported me back fifty years and a good few thousand miles to childhood holidays at, what was then, the seaside resort of New Brighton on the tip of the Wirral Peninsula. New Brighton in Santa Cruz County, California and New Brighton, Merseyside share but one thing in common : they were both named after the fashionable Sussex resort of Brighton. New Brighton Beach in California takes its name from the now demolished New Brighton Hotel which was built a few miles outside Santa Cruz in the 1870s by one Thomas Fallon. He was hoping that the Hotel would become the centre of a thriving resort and chose its name in the hope that it might give the impression of genuine Victorian glamour. As an exercise in spin, it didn't work. The Hotel failed and was later demolished. Part of the grounds were converted into the small State Beach which now bears the name. 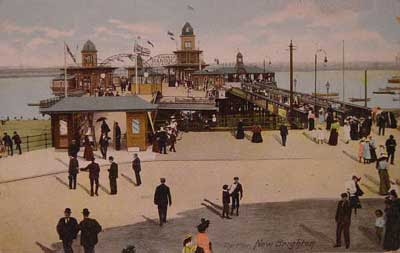 New Brighton on the Wirral Peninsular was also an exercise in reflective glory. Like its Californian cousin, it was named after what was seen as the most elegant resort of Regency Britain. But New Brighton - which is only a few miles away from the City of Liverpool - never did elegance. Instead it became one of the most popular seaside destinations for train-loads of working class families on their annual holidays from the northern industrial towns. Reaching its peak of popularity in the inter-war period, New Brighton fell into decline in the sixties and seventies. The last time I visited the area - about twenty years ago - there was little left of the crowded pleasure gardens, sandy beaches, ice-cream stalls and fish and chip shops that I remembered as a child.
Like thousands of other northern families in the 1950s we would head off for a week's holiday each summer. My mother favoured Bridlington on the North Sea coast for these annual excursions, my father preferred New Brighton at the mouth of the River Mersey. Long before I appeared on the scene, a compromise of sorts was reached which meant that one year we would catch the train east to Bridlington and the following year it would be a train journey to the west to New Brighton. In some ways you would have been hard pressed to tell the difference - certainly as far as the accommodation was concerned. This was the age of the boarding house : dreadful brick terraced affairs which smelt of steamed vegetables and which you were thrown out of each morning and not allowed back into until tea-time. My most vivid memories of family holidays during this period were of sitting in municipal shelters watching the rain drip down and waiting to be allowed back into the warmth of our lodgings. 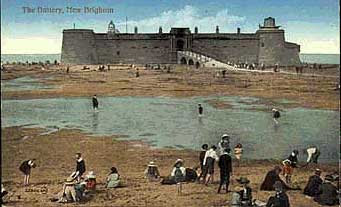 There were differences between Brid (it was always called Brid) and New Brighton. Brid had a harbour and fishing boats, long amusement arcades that seemed to go on for furlongs, and a Spa Theatre. New Brighton had a fort, an outdoor swimming pool, and ferries. The fort still exists : the outdoor swimming pool and the ferries are long gone. Built in the 1820s to guard the entry to the River Mersey, Perch Rock Battery (to give it its official title) only ever saw its guns fired on two occasions. The first time was on the outbreak of World War I in 1914 when a Norwegian ship - unaware that war had broken out - failed to acknowledge a signal from the Fort which at the time was under the command of a local dentist. He ordered a warning shot to be fired across the bows of the Norwegian ship. The guns were wildly inaccurate and the shell landed on the sand dunes at Crosby on the other side of the River Mersey. The shell was taken to the mess of the Seaforth Battery where it was put on display with the message "A Present From New Brighton". The second time the guns were fired in anger was at the outbreak of World War II when again a warning shot was sent across the bows of a local fishing boat which was entering a closed channel. The owners of the fishing boat were later made to pay for the cost of the two shells which had been fired.
I remember sitting on the sands at New Brighton - it must have stopped raining. I remember looking up at the massive fort and wondering what great tales of courage and conflict it could tell of. Little did I know.
at June 04, 2007