What Have We Done To Deserve This?

I must confess that when I pulled back the curtains this morning, looked out, and saw the still-pouring rain I said - to nobody in particular - "what have we done to deserve this?". It feels as though it has been raining for almost the entirety of June. Indeed, I suspect I can date the start of this latest cycle of atrocious weather - it coincided with the re-painting of my now-famous yellow balcony and the purchase of a new set of table and chairs. Looking at the balcony today is enough to bring tears to the eyes, but if they did come, the tears would soon be washed away by what appears to be endless rainfall. 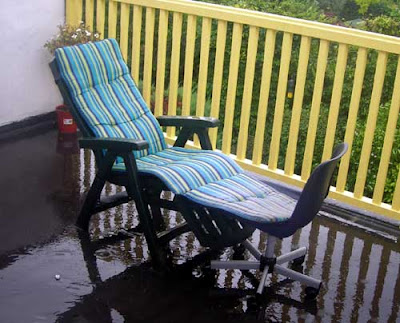 Of course I don't really believe that re-painting my balcony somehow brought about twenty-five days of almost constant rain. Nor do I believe - despite my exclamation this morning - that the current spell of persistent rain is a result of something I, or my family have done. The furthest I am prepared to go is to accept that there is likely to be a causal relationship between human activity over the last hundred years and gradual climate change. But that gradual process of climate change has nothing to do with the current lousy weather. My early morning exclamation is nothing more than an example of vestigial vocabulary, a throwback to the days when mankind knew no better, the verbal equivalent of the coccyx.
.
Although we have become more sophisticated in teasing out the connection ( or lack of it) between cause and effect in some areas, we seem unwilling to do so in other areas. Witness the stream of "research findings" that are little more than barmy. The media is very fond of such items and they frequently find their way into the so-called "news". You know the kind of thing : "A university research project has shown that February 12th (or some such date) is the most dangerous day of the year .." or "Scientists have proved that drinking purple grape juice will reduce your chances of catching Empty Head Syndrome (or some such disease)".
.
As an antidote to the spate of illogical thinking engendered by my questioning the cause of the rainfall this morning I turned with scientific gratitude to the excellent website of Professor David Colquhoun (Improbable Science). This is the website to access if you are ever tempted to stray into the bizarre ways of quackery. There were attempts recently by the forces of darkness to have the website removed but I am glad to say it is back in all its glory once again. After reading the various postings on the site for half an hour or so I am returned to my normal rational self. The rain is coming down, not because I have transgressed some unwritten law of the Gods, but because high pressure is driving in a prevailing system from the south-west (or some such thing).
.
LATER:
I wrote the above piece about two hours ago. Since then, the rain has got even heavier and there are numerous severe weather warnings going out all the time. My wife just phoned to say that she is stuck in Sheffield, all trains to Huddersfield having been cancelled because of floods. I have just returned from the shops having decided it might be wise to start stockpiling food. I have procured a few candles and I am about to set up a little altar in the corner of my room. Perhaps I need a sacrifice. Now where is that pesky dog?
at June 25, 2007