My attempt to get fit and lose weight in anticipation of the upcoming holiday takes me four or five times a week down to the swimming pool. In order to get to the pool of choice - which is situated at the Holiday Inn in Brighouse - you have to walk through the hotel lobby which is a pleasure for me as I am fascinated by hotel lobbies. It is not the architecture or design of them (they are usually as common as breeze block), it is the people who sit in them. All inhabitants of hotel lobbies share a certain look, a look you hardly see anywhere else. It doesn't matter whether you are in New York, Hong Kong or down the road in Brighouse, it is the same. Documentary evidence also suggests that it doesn't matter whether you are in the twentyfirst or the twentieth century - the look remains constant. If you take a look at almost any of the paintings of the American artist Edward Hopper, you see the look. 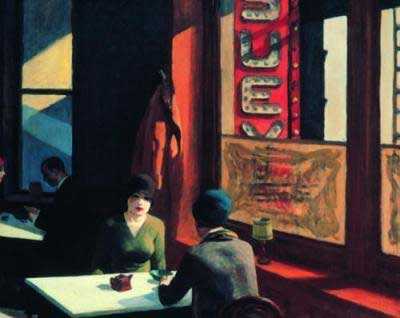 In the first place there is a kind of emptiness, a vacancy which provides the primer over which other emotions are sketched in a minimalist way. Time is always being marked. People are always on the way to somewhere, never there. And there is a loneliness which is unmitigated by company. Such faces make you want to go in search of the back-story. Why are they here, where are they going and why are they going there? The author Arnold Bennett had a lifelong love of hotels and hotel lobbies and he would sit and watch the people for hours and invent their stories.
My attempts to put together an entry for the Calderdale Short Story competition (see the posting of a few days ago) has, after just 214 words, foundered on the rocks of tedium. So, when I make my way to the swimming pool later this morning, I will search those faces with even more care. Searching for inspiration.