My Finger And The Coming Armageddon

About eight weeks ago, following a hectic night at the Rock Tavern discussing Chinese porcelain (or some such thing), I trapped my finger in the bathroom door. It was a simple mistake, one that could have been made by anyone who had just consumed four pints of Tetley Bitter and a couple of malts. I momentarily forgot that my finger was part of the organic mass I know as Me and therefore closed the door on it with as little concern as I would extend - in normal circumstances - to the lintel. The result was a shriek of pain which woke the dog and curdled a bottle of milk in the fridge. The following morning I noticed that a small circular blood blister had formed under the nail as a semi-permanent reminder of the folly of over-indulgence. I say semi-permanent because, on observation (as they say in the scientific world), the blister began to slowly progress towards the top end of my nail. Supposed scientists of my acquaintance have attempted rational explanations for this phenomenon, claiming that the blood blister is attached to the inner surface of the nail and that, as the nail grows, the blister moves. But to me the movement has all the mystery and awe of an Elizabethan Royal Progress. Each morning, the first thing I do when I wake up is to check the progress of the blister. It dominates my thoughts. It's slow progression provides the beat that underpins the music of my life. And the one question which monopolises my normally wide-ranging thought process is "what will happen when it gets to the end of my finger?" 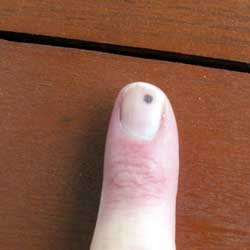 An answer was provided a couple of weeks ago in a vivid dream I had one night. The evening had been unremarkable other than for the fact that I had been culling my malt whisky collection. The dream was vivid, the prophesy was Old Testament clear. When the blister finally emerges from underneath the nail, the world will come to an end. OK, I can hear you scoffing already, but bear with me a minute. The following morning I had a feeling that the prophesy in the dream was spot-on. And I have had such feelings before, lots of times, and I have been right. I remember, forty years ago, having a feeling that England wouldn't win the World Cup in Mexico: and I was right. I remember having a feeling that William Hague was not good Prime Minister material: and I was right. I remember a feeling that Silvestre, our pet rabbit, wouldn't life much longer: RIP Silvestre. So with a track record like this, even the skeptics out there will have to pay attention. OK, you might ask, why should anyone choose to announce Armageddon by the movement of a blood blister on the index finger of my left hand? Why not? Some people believe that you can precisely date the forthcoming Battle of Armageddon by when the branches of a particular fig tree "are tender and putteth forth leaves" (see Armageddon Online for the precise logic of the prophesy and note that their date agrees, more or less, with mine).
Anyway, all I am trying to say is that time is running out,. As you can see from the above recent picture, the end is nigh. I appreciate that discerning people would like as much notice of the precise timing of the end of the world as possible and therefore I am today launching a unique offer. I have established a new subscription-only Blog "My Finger And The Coming Armageddon" which will contain daily photographs of the progress of the blood-blister. By logging-in daily to this site - the URL of which is available for a small fee - you will be able to fine-tune your end-of-life plans. For your convenience, the one-off subscription fee can be paid via all major credit cards. And the way things are looking with my finger at the moment, you will not even have to pay the first month's interest on the bill.
at June 20, 2007