I can think of many good reasons for going to New York. More than any other city, New York is an icon of the times - a backdrop to the story of the world in the twentieth century. I have never been to the city but it is on the top of the list of the cities I want to see before I fade into dodderihood. I want to see the buildings, walk the streets, smell the smells. I want to look up at the Chrysler Building, stroll in Central Park and wander through Greenwich Village. And I want to see Blossom Dearie. 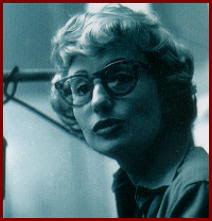 I fell in love with Blossom Dearie when I was twenty (and she must have been about forty). Forty years on and I am still in love with her and she is still going strong. But now she seems to limit her appearances to concerts in New York. If you have never heard Blossom Dearie sing - and if you had, you would remember it - it is worth going in search of her music. In the age of commercial downloads this is not as difficult as it once was. She has a voice that is instantly recognisable, a voice which initially seems to have been stripped bare of emotion, but later you realise that it has merely been stripped of pretense. If music was high art she would sit with the impressionists and particularly those painters who favoured economy of stroke. She is the Seurat of the jazz divas in a world where Ella Fitzgerald was the Titian. That economy of phrase sits perfectly with Pulitzer Prize lyrics. Lyrics that beg to be sung in classy, sleek sans-serif.
So when you listen to Blossom sing, make sure you catch her interpretation of the songs of writers such as Dave Frishberg (I'm Hip, My Attorney Bernie, Peel Me A Grape etc). For songs which are as sharp as these you need a singer who is equally sharp. Blossom Dearie is so sharp, she should not be on sale to anyone under the age of 18.
In her song, Dearie's Blues there is a memorable line :
"If you don't like my peaches baby, why do you shake my tree?"
So when people now ask me why I would so like to go to New York I add to the well established list "to shake Blossom's tree".
at June 07, 2007