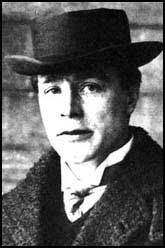 Last night I saw Victor Grayson. It was in the upstairs room at Marsden Socialist Club. I was killing a few moments during the Beer Break of the Marsden Jazz Festival Committee Meeting. Victor was doing nothing other than smiling at me from an old photograph on the wall. I'm not sure how our meeting affected him, but for me it made me go home and re-read the very strange and very mysterious story of British socialism's lost leader.

Grayson was born in Liverpool, the son of a carpenter, in 1881. Like many great orators, he had a bad stammer as a child, but overcame this and became active in the nineteenth century trade union and socialist movement. In January 1907 the Colne Valley Branch of the Independent Labour Party - more than likely meeting in the very room in Marsden where his picture now hangs - adopted him as their candidate for the forthcoming elections. The leadership of the Labour Party tried to pressure the local ILP branch to drop their support for his candidacy (there was an informal electoral pact with the Liberal Party) but they refused and against all the odds, Grayson was elected. Politically, he stood on the extreme left wing of the Party and openly preached the need for revolution and the overthrow of capitalism. Angry at their opposition to his candidacy, Grayson refused to join the official Labour Group in Parliament, and sat as an independent socialist. He quickly fell foul of the rules and conventions of Parliament and was removed from the House on several occasions.

However, just as frequently, he removed himself from the House. He attended few debates, preferring to concentrate on lecture tours and increasingly frequent bouts of heavy drinking. Stories of his drunkenness and luxurious lifestyle quickly spread and in the 1910 election he lost his parliamentary seat. In the years that followed, there were episodes of heavy drinking and several attempts to re-launch his political career, all of which failed. He surprised many of his socialist supporters by becoming a ardent supporter of the First World War. In 1915 he left Britain to go to New Zealand, but immediately joined the New Zealand army and returned to the Western Front where, in 1917, he was badly wounded.

After the war he returned to Britain where he became involved in a bitter campaign against the then Prime Minister, David Lloyd George. He claimed to have proof that Lloyd George was involved in selling political honours and the involvement of an MI5 agent, Arthur Maundy Gregory, in this corrupt practice. In September 1920, Grayson was beaten up in The Strand. He claimed that it was an attempt to silence him and stop him naming the "monocled dandy" (Gregory) as a key player in the sale of honours. A few days later he received a telephone call whilst out drinking with friends. He told his friends that he would be back shortly and left them. Later that evening he was seen entering a house down by the River Thames. After that, he was never seen again.

No body was ever discovered, no trial ever took place. But there were rumours and sightings and theories and speculation. Many claim that he was murdered to silence him. Some claim he fled the country and lived under an assumed name in Australia. Nobody knows. What is known, however, is that Gregory continued to have a somewhat shady involvement in British politics (he was one of the people behind the forged Zinoviev Letter that helped defeat the Labour Party in the 1924 election) before finally being imprisoned in 1932 for attempting to sell political honours.

So many aspects of the story have a contemporary feel about them. I would have happily sat down with Grayson for an hour or two and attempted to find out what he knew and why he vanished. But Victor Grayson wasn't talking. He was just looking at me from his spot on the wall in the upstairs committee room. Smiling knowingly.