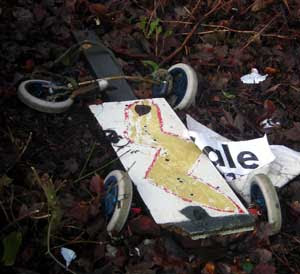 When I was young I had a dream. We all had them - those recurring day-dreams which somehow composed a picture of perfect happiness. Into such a picture would be transposed all those things we longed for : school-free days, summer weather, friends who wanted to be in your gang ... that kind of thing. For me, the two central images would always be a cart and a dog.
I had always longed for a dog with a degree of longing only those who knew the true meaning of impossibility could experience. To my parents, dogs were smelly, flea-ridden, an encumbrance, a pest, an expense and something people living on Oaklands Avenue just did not have. To me a dog would be a perfect companion, loyal and loving. In the clash of these perspectives I knew I could never win. But I could dream.

A "cart" was something that was vary popular amongst my friends in the 1950s. Invariably home-made, such carts consisted of a central wooden spine to which were attached four old pram wheels. A wider board would be attached to the rear of the central spine for the driver to sit on - or during more sporting occasions - lie flat on. Carts were self-propelled, exciting, adventurous, fun and offered a form of childhood transport that could take you to strange lands such as Shibden, Hipperholme and Shelf. To my parents carts were dangerous, silly, dirty and something people living in Oaklands Avenue just did not have. Once again, in the battle of perspectives, it was no contest. Once again I could dream.

Eventually the dream subsided, to be replaced by other, more complex, teenage dreams. But the degree of longing I invested in that childhood picture has remained with me throughout my life as a kind of acquisitive yardstick. Yes, a flat screen telly would be nice - I tell myself as I walk around Dixons - but do I want one as much as I wanted a dog and a cart.

All this came back to me yesterday as I took my dog Amy a walk in the January rain. We turned a corner and there, in front of me was an old broken cart. The wheels were spreadeagled and the wooden spine was broken. But still it sent a thrill down my old spine. I wanted to patch it up, fix the wheels, oil the axles, hitch Amy up to the front and fly home. Send the flat-screen back, trade in the digital camera, pawn the new computer. The boy had his dog and his cart at last.