American Billionaire To Take Control of the NHS (Hopefully) 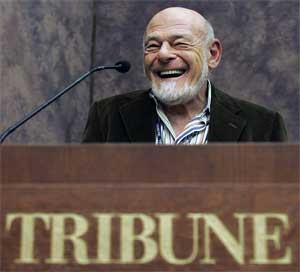 When real-estate mogul Sam Zell became Chief Executive of the American media conglomerate Tribune Co. at the end of last year many anxious employees and curious onlookers wondered what changes would befall the company that controls such newspapers as the Los Angeles Times and the Chicago Tribune. After all, the blunt-speaking, jeans and cowboy boot wearing billionaire had little or no experience of the newspaper industry and some feared a combination of Murdoch-type editorial control and blatant asset-stripping. But curiously enough, it does not seem to have worked out that way.

One of the first actions of the new regime has been to publish a new Employee Handbook which sets out corporate core values and workplace rules. During a previous life, I would spend long and painful hours ploughing through such documents within the NHS. As Human Resources departments became more powerful such policies would expand in both coverage and complexity like a field of blooming jellyfish. It is therefore with outright joy that I read about the new employee handbook in an article in yesterday's Washington Post.

You can get an idea from the section marked Company Rules which runs as follows:

"Rule 1 : Use your best judgement.
Rule 2 : See Rule 1
That's it. That is the one hard and fast rule. Unless a serious mistake was made when you were hired, you have pretty good judgement"

Other gems include the following:

"Employee Manual
4.1 : Working at Tribune means accepting a creative, quirky, intelligent, odd, humorous, diverse, opinionated and sometimes annoying atmosphere
4.2 : Working at Tribune means accepting that sometimes you might hear a word that you, personally, might not use. You might experience an attitude that you don't share. You might hear a joke that you might not consider funny. That is because a loose, fun, nonlinear atmosphere is important to the creative process.
4.3 : This should be understood, should not be a surprise and is not considered harassment".

In an introduction to the Handbook, Zell writes that it is "a reminder not to take ourselves too seriously and to have fun". I have only one thing to say to Mr Zell and it is this : "when you've finished sorting out Tribune Co. do you fancy coming over to the UK to take charge of the NHS?"
at January 18, 2008