That's How The Story Ends 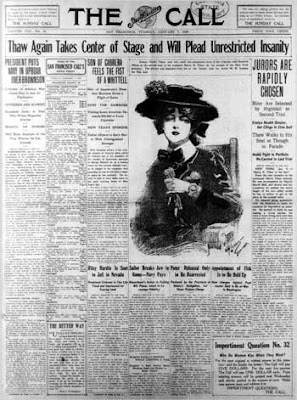 Still trying to keep to my challenge of reading a different newspaper every day, today I try a variation on the theme. To test the validity of the claim that "nothing ever changes" I decide to limit myself to a newspaper published on the 7th January 1908 - just 100 hundred years ago. Access to the newspaper is easy thanks to the magnificent Library of Congress "Chronicling America" project which aims to make good quality digital images of newspaper archives available. But, be warned, only follow the link if you are prepared to get sidetracked from what you are supposed to be doing for a day or two.

Limiting myself to just the front page, here is a quick analysis of the stories that made the headlines in the San Francisco Call of the 7th January 1908:

* The start of the second trial of wealthy coal and railroad heir Harry K Thaw for the murder of the New York architect Stanford White. The article contains a sensational description of the opening of the trial - at which Thaw pleads insanity - and the part played by his wife, Evelyn Nesbit. The illustration is of the good lady herself who - it is said - testified on behalf of her husband in return for a divorce and a $1 million settlement.

* A developing row between the US President - Theodore Roosevelt - and the head of the Navy personnel department, Rear Admiral Willard Herbert Brownson. Brownson resigned following the decision by the President to appoint medical officers to be in charge of hospital ships, which was seen as an insult to the US Navy. The headline - "President Puts Navy In Uproar Over Brownson" - has a nice contemporary feel about it.

* The report of an "incident" in which a noted San Francisco capitalist - George Whittell - is accused of pushing the son of the President of Guatemala down a flight of stairs. The dictators' son - D Cabrera - bruised his bottom and his pride and demanded $50,000 in compensation. The incident occurred after Cabrera had been out on the town with Whittell's son and, it would appear - led him into bad ways.

* Other choice bits include a report of how the Navy has decided to encourage its sailors to take exercise and has therefore agreed to pay the bill for a Navy rating's broken jaw which he received in a football game. The re-arrest of a businessman who faces charges or perjury and corruption with regard to the purchase of public land. It appears that he was sentenced to 24 hours in jail but was released at tea-time, his sentence having been halved for "good behaviour"! A competition in which you can win yourself $5 by writing a witty and original answer to the question "why do women kiss when they meet?"

So, there we have it. A political scandel including the President, a sensational murder trial, a society scandel resulting from a drunken night out on the town, a corrupt businessman getting a few hours in jail; ..... very little has changed in 100 years,

One of the great advantages of reading newspapers which are 100 years old is that you know how the story ends. Thaw was convicted or murder and found insane. He spent some time in an asylum but his money bought him a degree of freedom and he went on to commit further crimes before dying, aged 76, in 1947. His partly-fictionalised story forms the basis of the current best-seller "An Interpretation of Murder". Roosevelt survived his row with Rear Admiral Brownson and went on to have a century of stuffed bears named after him. Brownson had two battleships named after him. I have been unable to discover whether Whittell ever paid Cabrera's son the $50,000 in compensation. Cabrera senior - a nasty piece of work by all accounts - went on to rule Guatemala until 1920 when he was forced out of office. Something of an eccentric he tried to get the cult of Minerva adopted as the official religion of Guatemala and built several Temples to Minerva.

It would be quite nice if we knew how the various stories that populate the newspapers of the 7th January 2008 ended. But there again, perhaps we are better off not knowing.